I’m afraid this post is slightly more scientific than usual, and bone specified – some people may find it more or less interesting than others. Just a warning – but no worries, I have some classic nature writing lined up soon, if you can bear with me. Here goes…

If you find an owl nest, you’re a very lucky person. Not only because it allows you to watch some of our island’s most beautiful and interesting birds raising their young, as I was lucky enough to last year, but you can also have a lot of fun through examining the pellets beneath the nest.

They may look disconcertingly like a dropping or faeces, but it isn’t – it is made up of the indigestible parts of the owl’s diet, mainly hair and bones, which the owl regurgitates through its mouth. I don’t know if that makes you feel any better about picking it up and taking it home with you, but nonetheless it’s the truth.

The trouble with my tawny nest last year was that the ground was very vegetated beneath it, and so it was very difficult to find pellets. But I have a friend, Alex Bayley (you can see his website here) and he has found out the location of a barn owl nest nearby. He very kindly took me to it and helped me find the pellets.
This is what they look like: 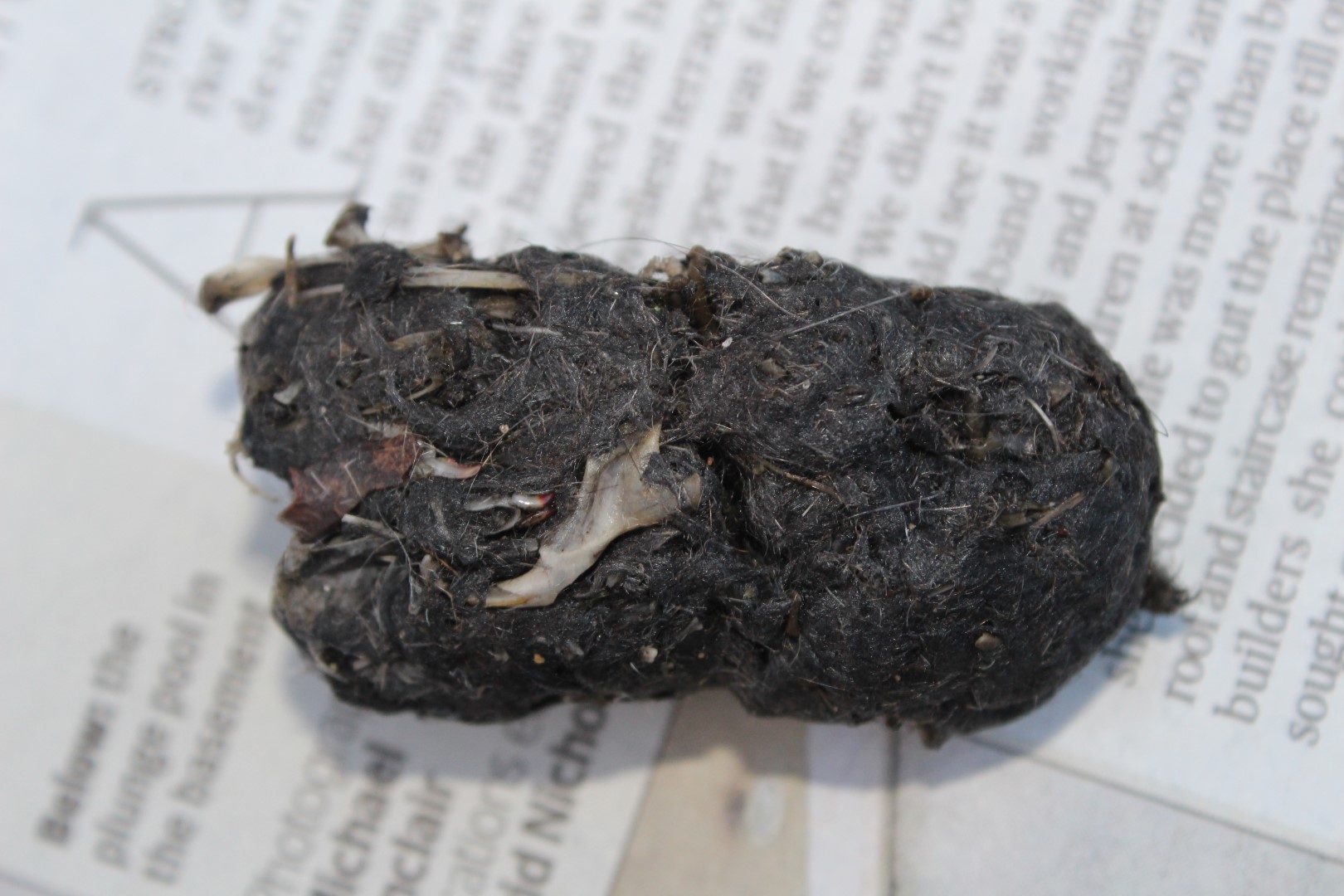 I brought them home and pulled them apart (using disposable gloves for hygiene). Each pellet was full of bones, and most were intact – owls swallow their prey whole, they don’t crush them with their teeth first. They are true gold mines for naturalists. I once did the same thing with fox scats, which, for the amount of effort you have to go to to clean the bones and to keep yourself and the house clean, it isn’t really worth it. But owl pellets are less smelly, and the whole bones you get in return make it worth your while. 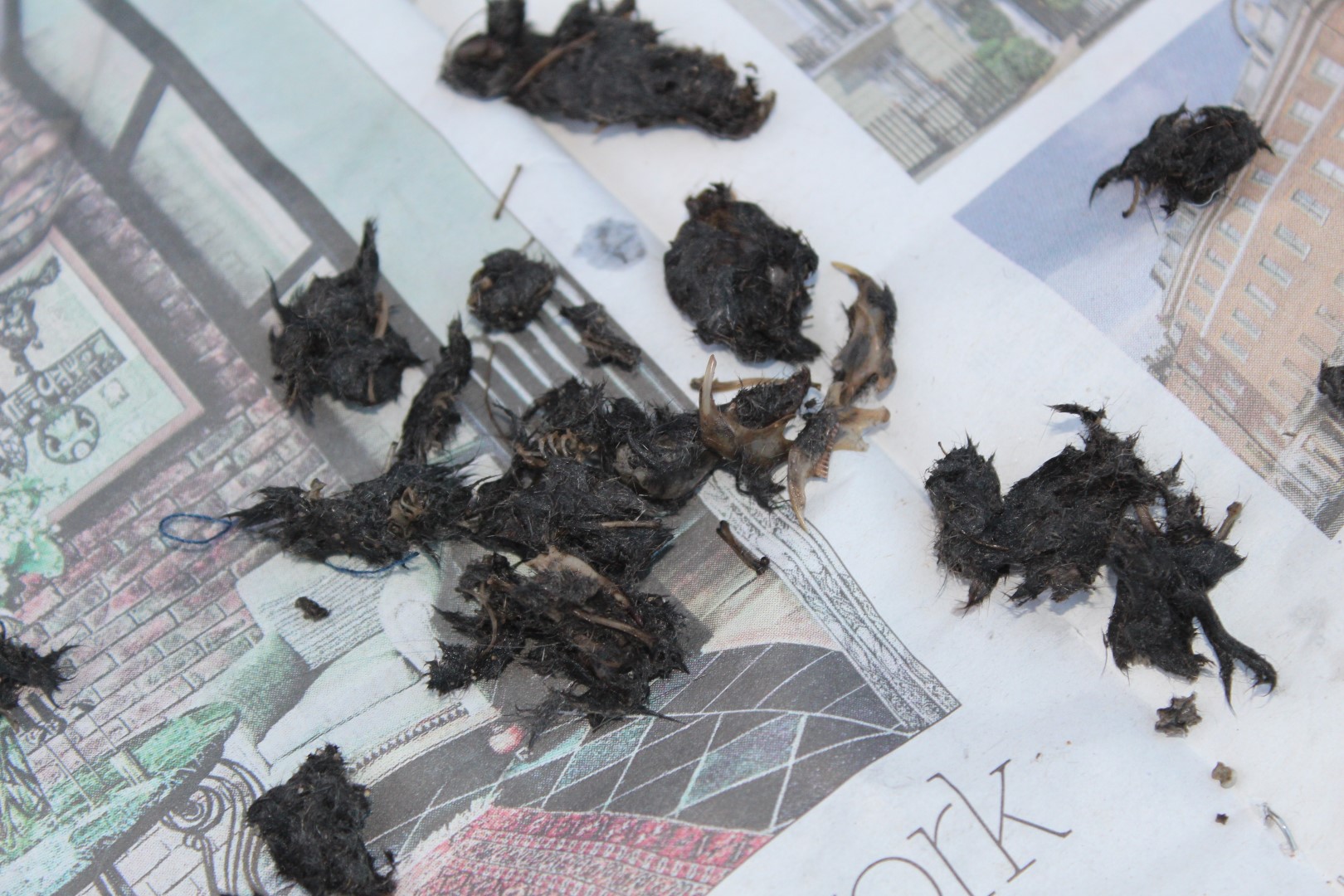 Unfortunately, the cleaning process of removing hair from the bone is quite difficult and frustrating, so I lost most of the smaller bones during the process. I did keep the skulls, which are the most interesting parts, and here they are! 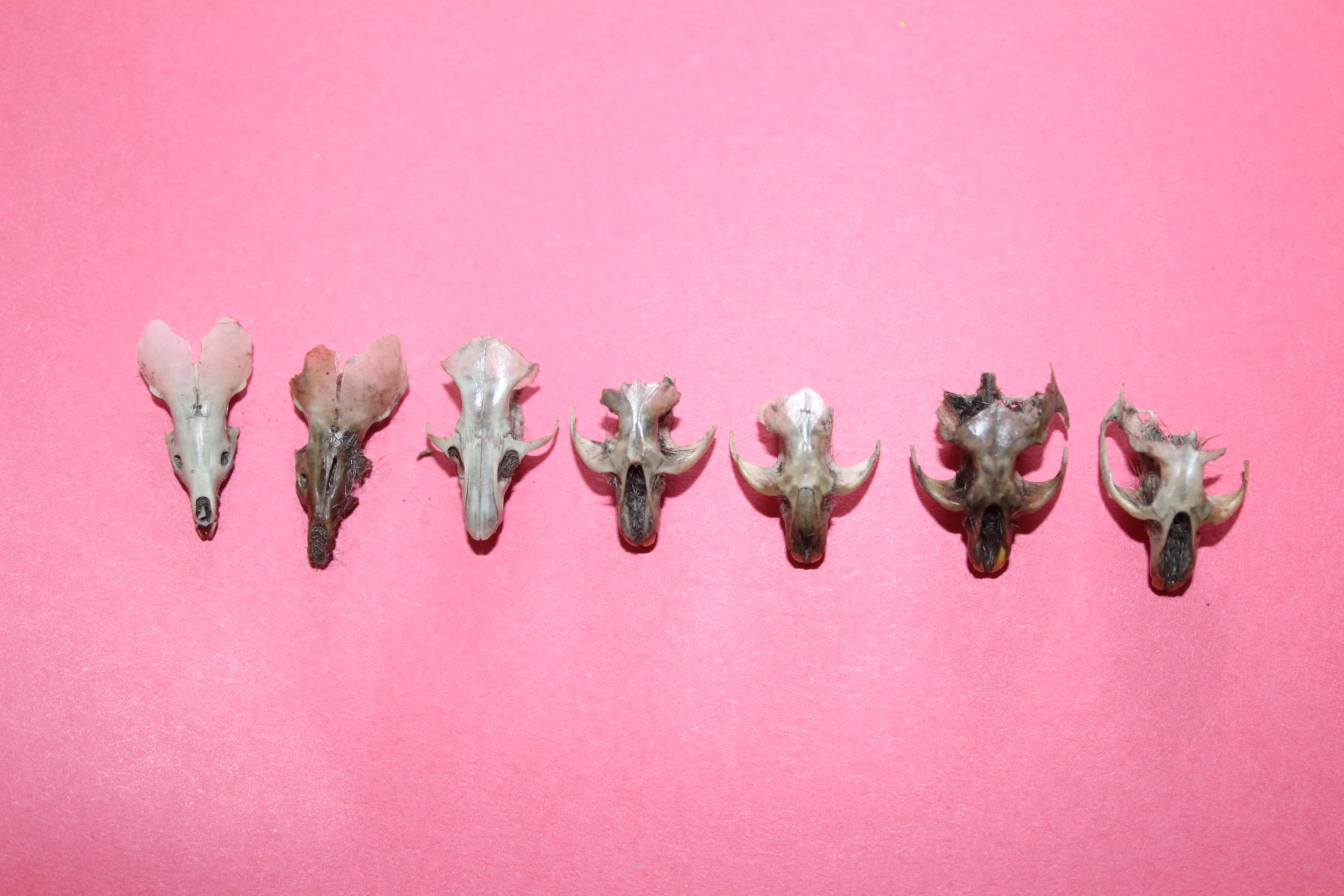 That’s 7 skulls from two pellets – not bad going for an owl. Apparently 3 skulls is the average for a pellet, and they produce 2 or 3 every 24 hours.
Once I had extracted these skulls, I set about trying to ID them. This is more difficult than you’d think, even if the skulls were complete. Shrews were easily separated from voles – they have much longer, thinner skulls with tiny eye sockets. I could then place these as Common Shrews because the jaw was 1cm long. 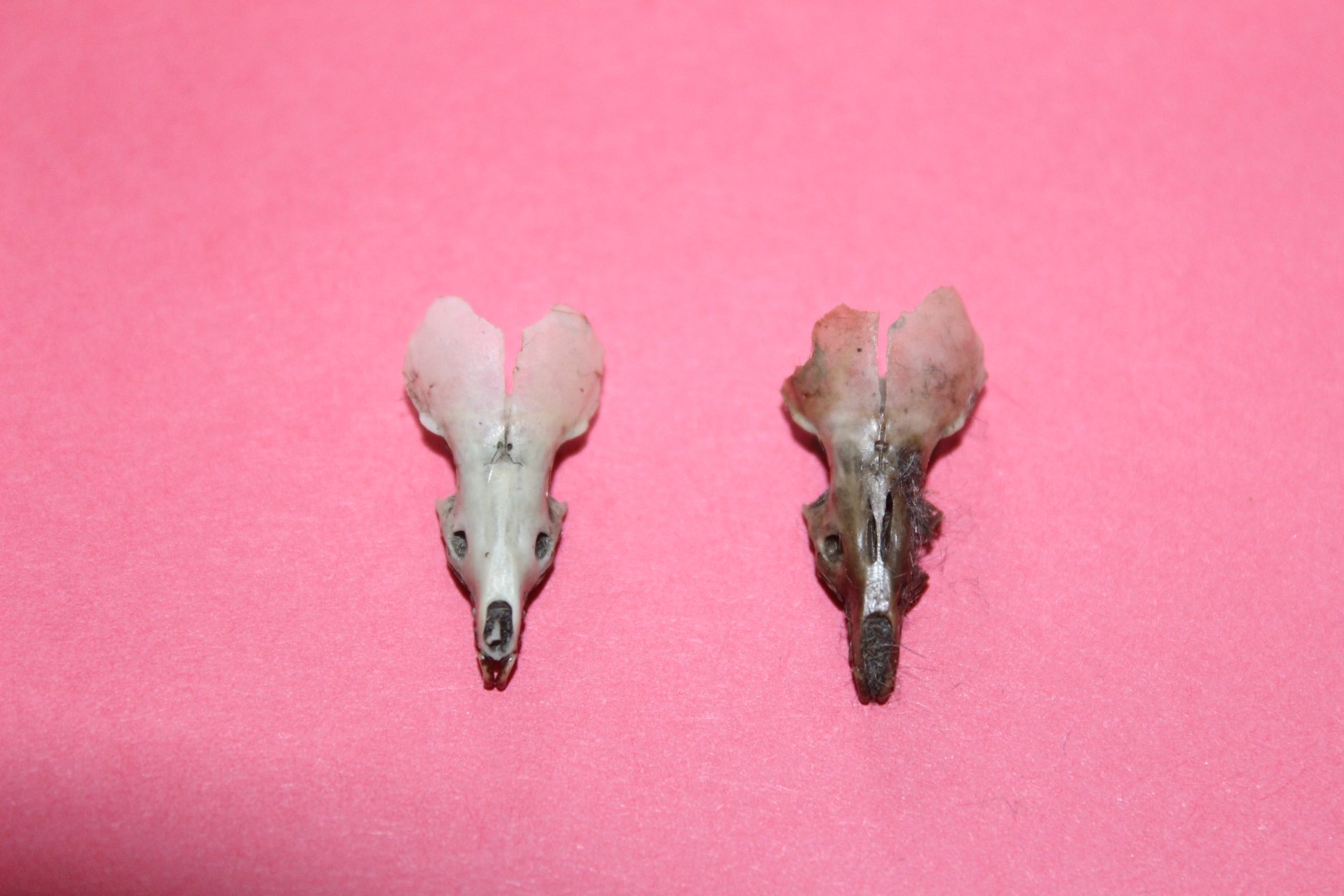 The 4 voles were trickier to ID. Water Vole Skulls were about twice the size of the vole skulls I had (Water voles’ being twice the size of a 20p coin). In the end, I found out the best way is to look at the teeth – Bank Voles have an extra loop on one of their teeth in comparison to Field Voles, see photo below. 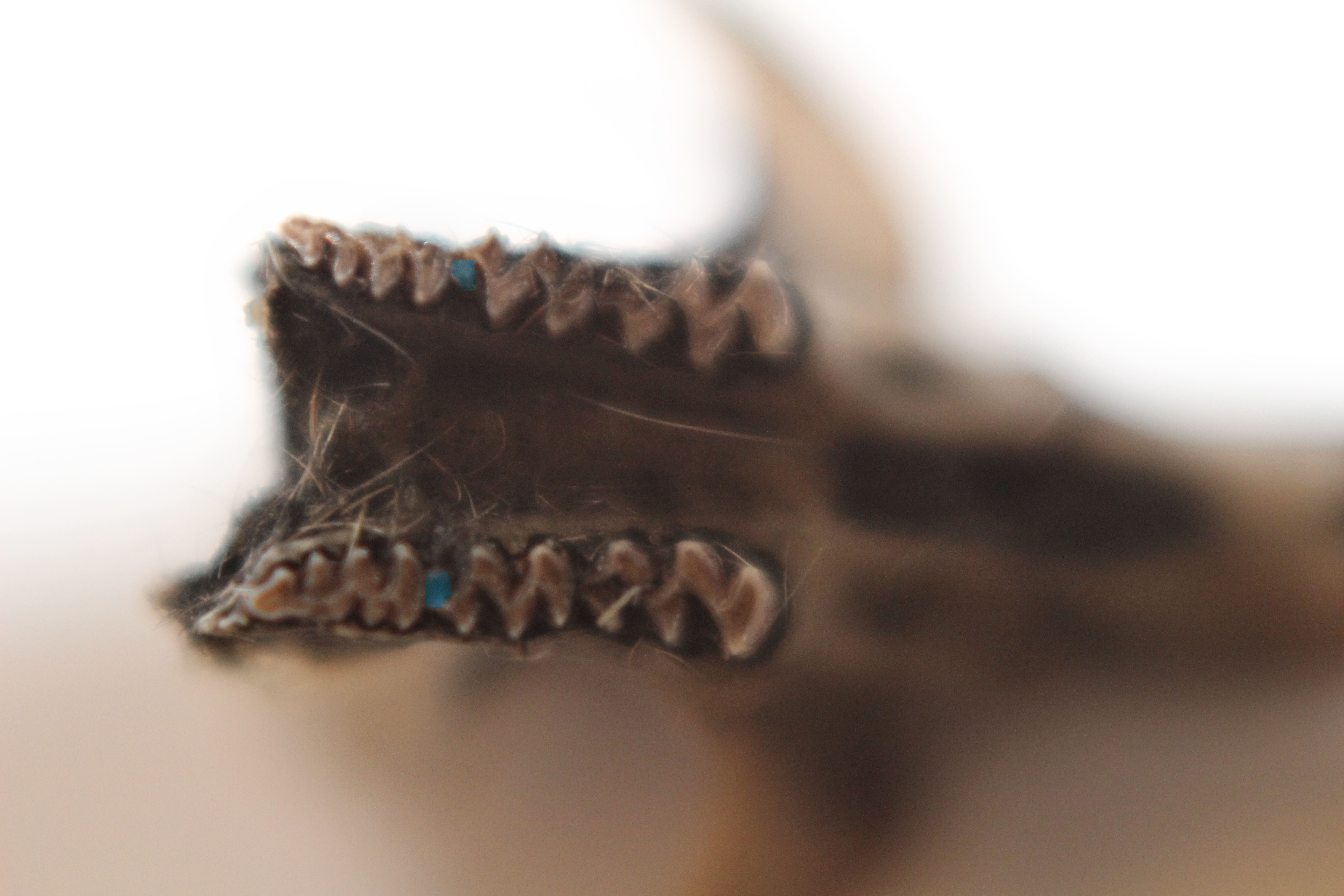 The blue loops on the zig-zag teeth would not be there on a Bank Vole.
Tricky, isn’t it?
So in the end I had four Field Vole Skulls. 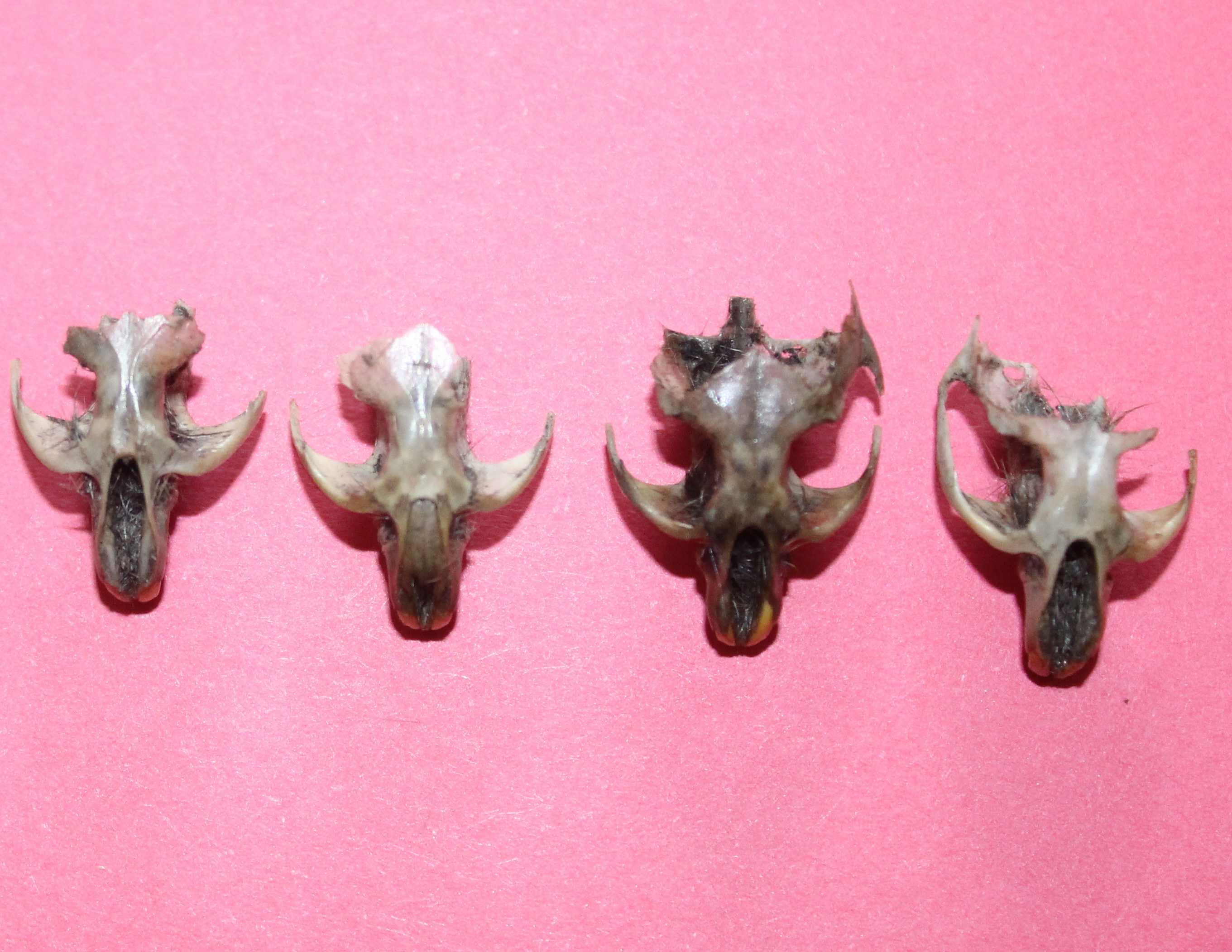 I had one skull left over – this one.

You can see it is a different shape in comparison to the wider vole skulls, and so I thought it was probably a mouse. When you look at the teeth, which are like football studs, this confirms it. 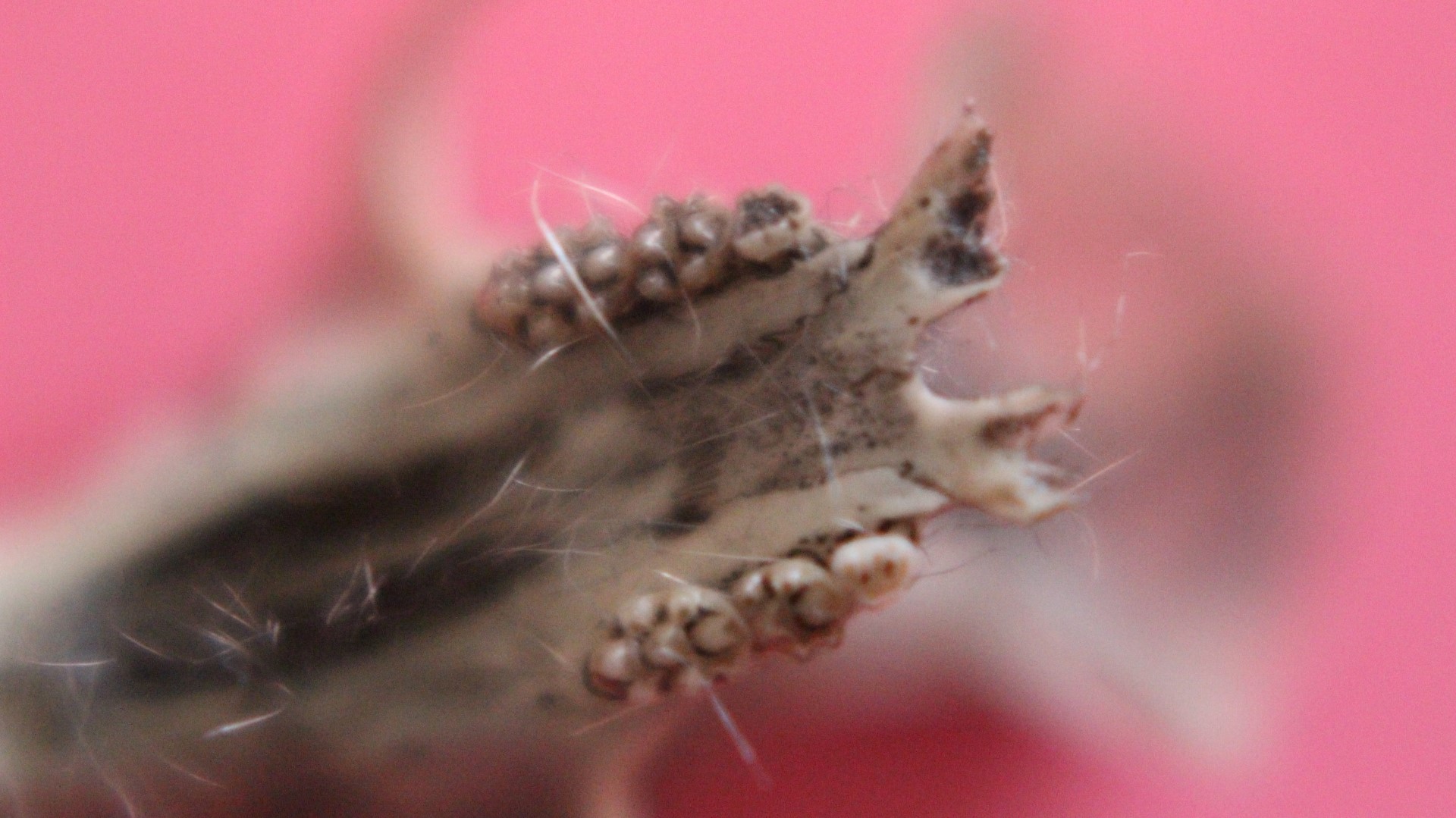 But what type of mouse?
This is where it got very difficult, and where I had to shift from the world of amateur self-help using internet guides and common sense, to employing the help of some experts and papers they sent me online. Thanks very much to them for their help.

The fact that there was no notch on the incisors told me that it was either a Wood or a Yellow Necked Mouse.
As I live in Surrey, which I believe to be part of the rarer yellow necked mouse’s territory, it could be either.
So in order to find out, I had to measure the width of the incisor. It was roughly 1.1 – 1.3mm, which suggests Wood Mouse, as opposed to Yellow Necked Mouse, which has incisors of length 1.45-1.65 mm.

There we have it – that very niche ID is done!

What does this tell us about the local ecology? Well, there’s a lot of Field Voles, a few Shrews and the odd Wood Mouse, apparently.
But as well as this, we can infer a bit more. All these animals are nocturnal, so the owl is hunting nocturnally (which may sound obvious, but barn owls do sometimes hunt in the day). The owl is mainly hunting over grassland, as that is where Field Voles prefer to live. From the amount of skulls, you can see that there is an abundance of prey, that the owl is eating well and is a good hunter.
From the position of the prey in the foodchain, you can also perhaps tell that their is a good amount of insects (which is what shrews eat) or vegetation (what the voles eat) etc.

If you study the pellets long-term, you can see seasonal differences in prey, and assess how the area’s ecosystem changes over time – this is very valuable information.

Very soon I should hopefully get some nice photographs and footage of the owl itself, and I’ll do a blog post on it when I get the chance.