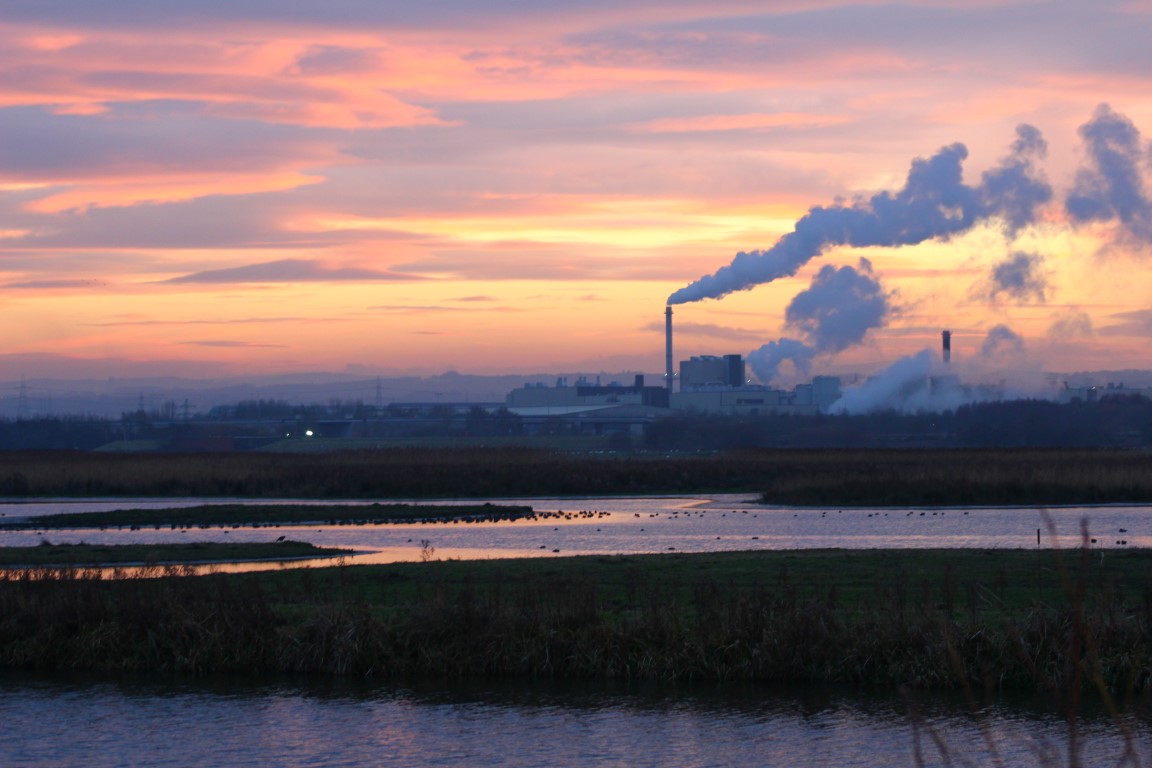 Last weekend we headed up to Manchester, and decided to stop off with some friends at RSPB Burton Mere, which is located on the Wirral Peninsula that juts out in between England and Wales. The reserve is relatively small and quiet, but that’s not to say it isn’t good for wildlife – this is probably one of my favourite RSPB reserve visits.
Not only did the combined visitor centre/main hide have a stove with a roaring fire (which I think my parents appreciated more than anything else) but the amazing sunset behind the factories provided a dramatic and strangely beautiful backdrop.
Right next to the hide, there was a group of Shovelers and Teal – two of our most beautiful ducks – and behind them there were multitudes of Wigeon, Canada Geese, Coots, and Mallards. 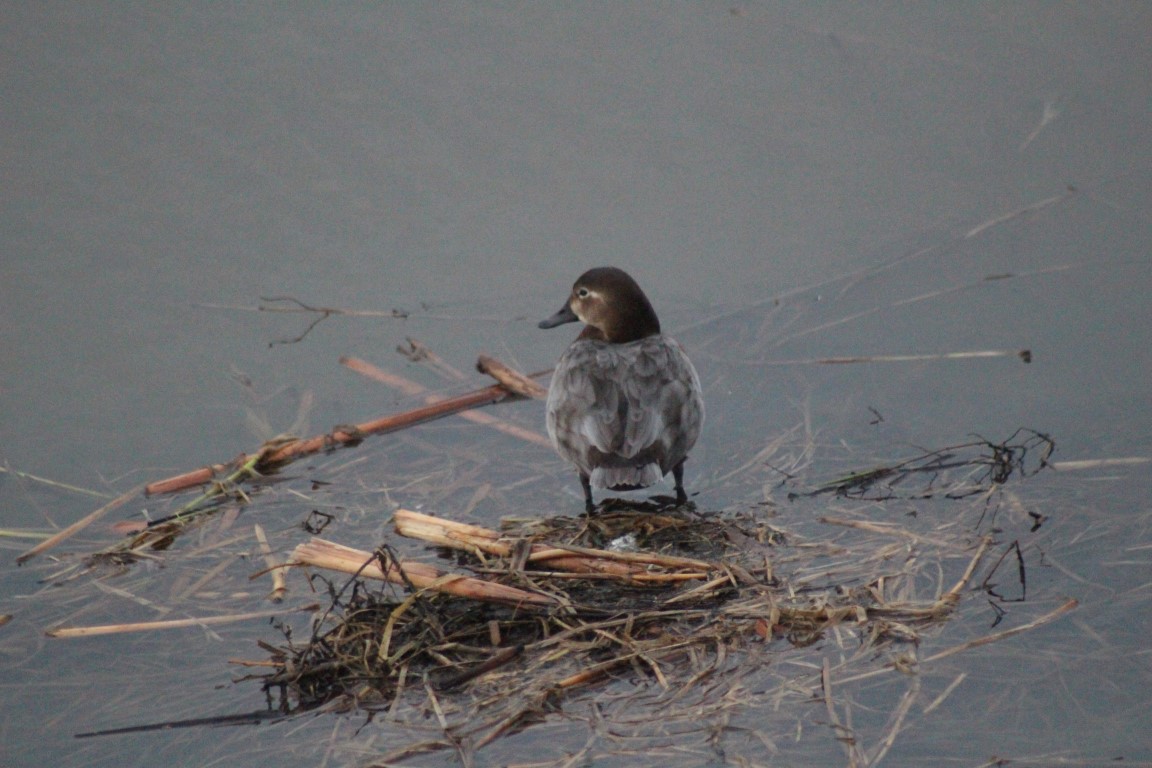 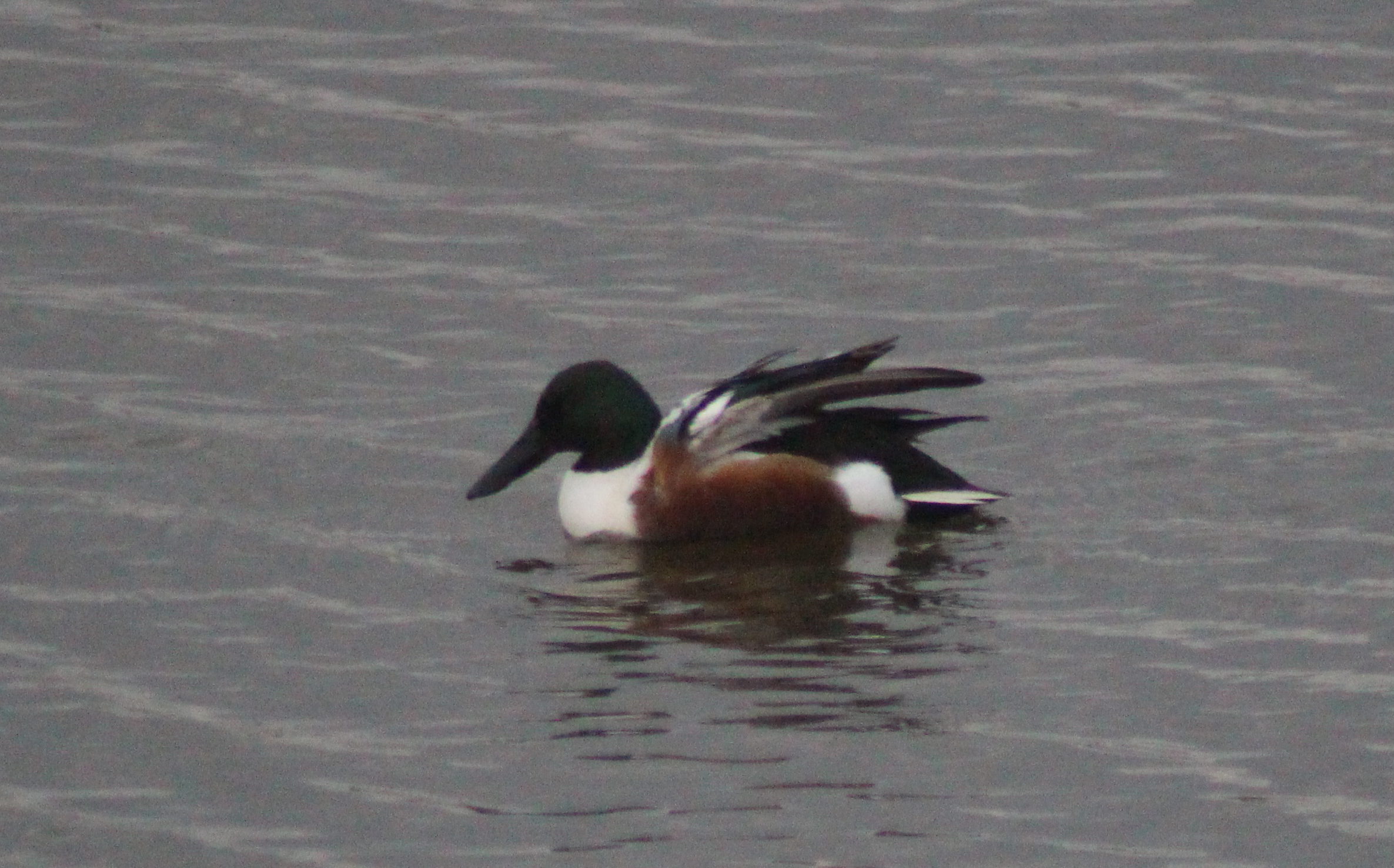 The most noticeable feature of Shovelers is of course their disproportionately long bill, which they use to strain and filter their food from the water. They have  special frills on the edge of their bills called lamellae which aid in this.
They have two separate feeding techniques; they can both upend and dabble (which you see in mallards) or they can filter by ‘nibbling’ the surface of the water.

Within minutes of stepping into the hide, I spotted a Marsh Harrier floating over the reedbeds on the opposite end. Just as I was getting over the excitement (it was the second time I’ve ever seen one), another joined it. And then another. And one more. In total, 4 Marsh Harriers were soaring behind the ducks! Here’s a bad photo (they were far away!)… 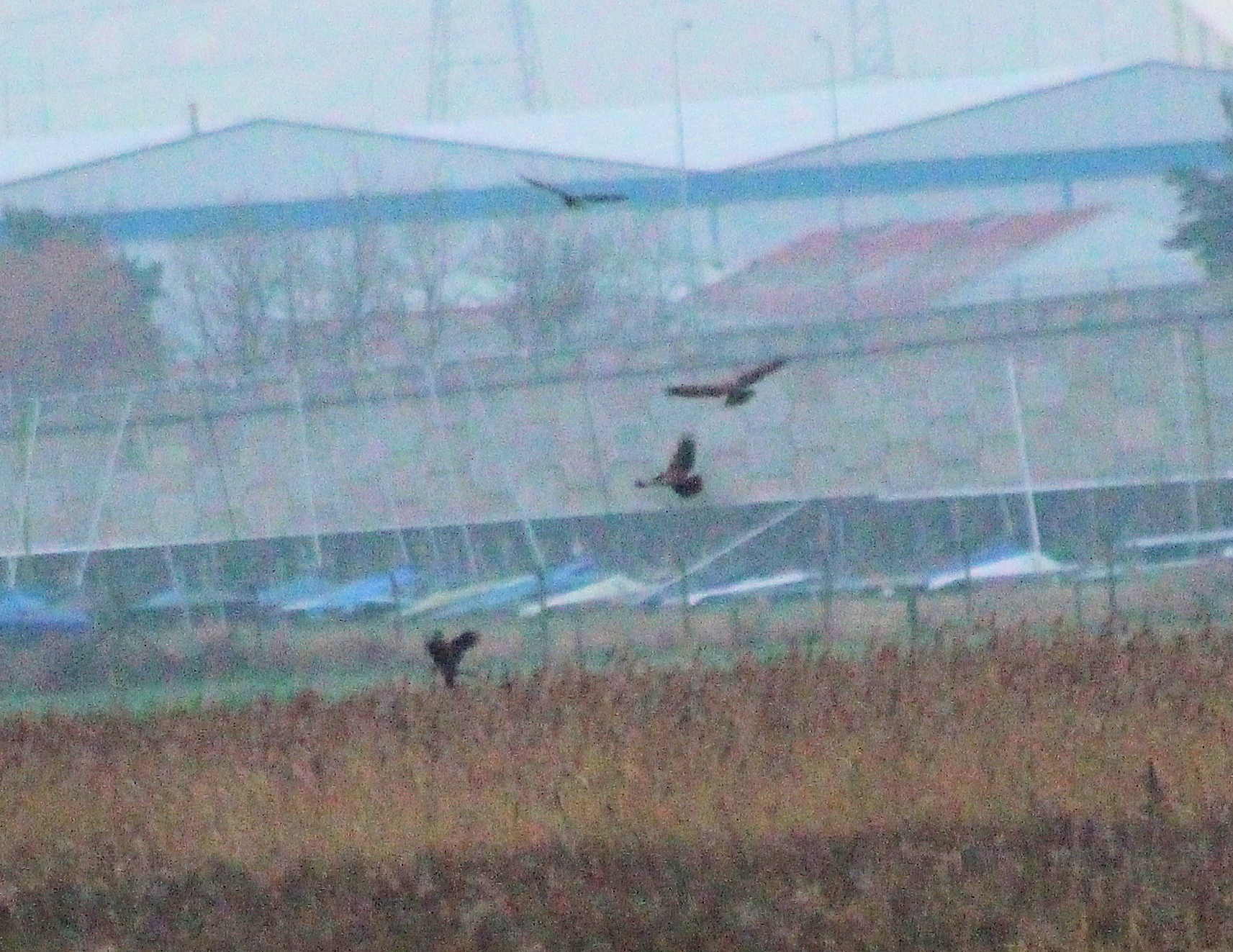 And here’s a bad video of them: (apologies for the loud jazz – it’s better than the annoying background noise that was originally there!)

I will be honest and say that I have no idea why they do this evening flight, and if anyone does know I would be very grateful if they could leave a comment using the box at the bottom of the page.

That video was cut short because at that very moment, someone else in the hide pointed out of a window and said ‘Look!’. I raced over, and was just in time to see a mustelid disappear into the grass in a few leaps and bounds. I snatched up my camera and just about managed the below… 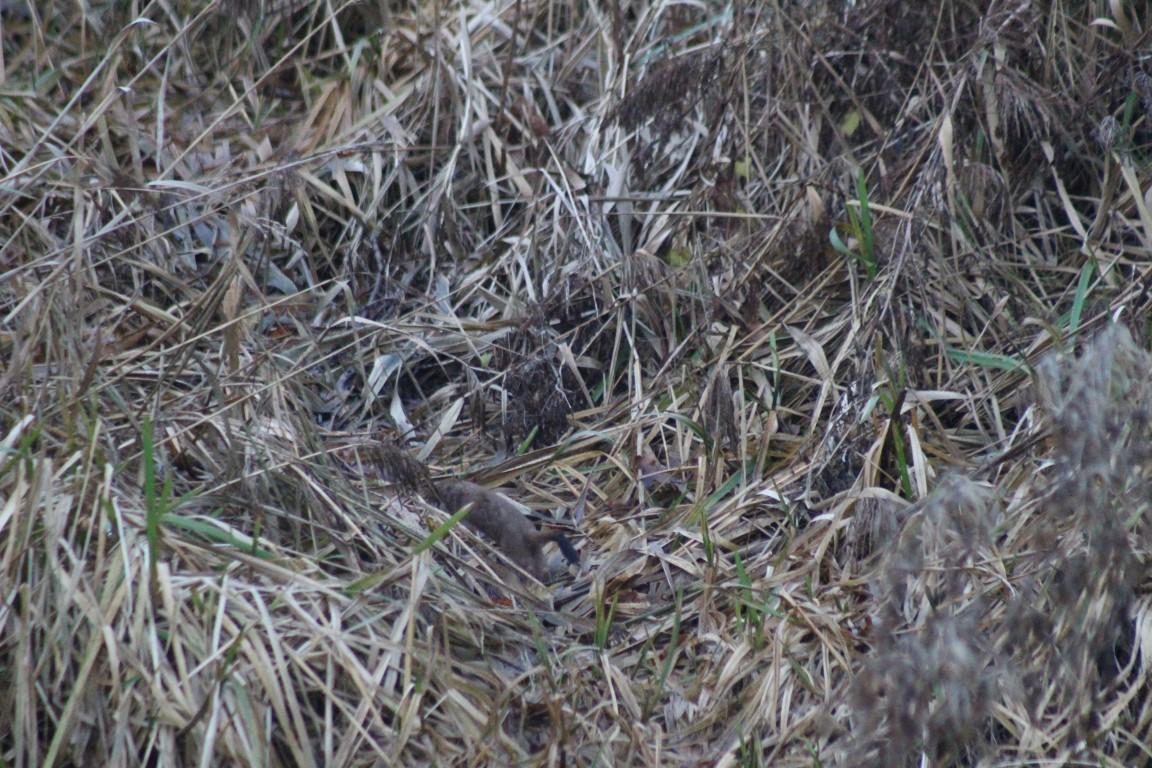 (just below/left of centre, if you’re having trouble)

The photo isn’t perfect by any means, but it contains just enough of the creature to identify it – the black end of the tail tells you it’s a stoat. This is the first weasel-like creatuure I have ever seen, and I was thrilled.
All this from the visitor centre!

We then finally plucked up the willpower to leave the cosy visiting centre and embark on a short walk to the nearest hide before it got dark.
We were treated to a variety of birds all intermingled together. It was quite difficult to identify some of them because it was so dark. This was the view from one side of the hide – see how many species you can count… 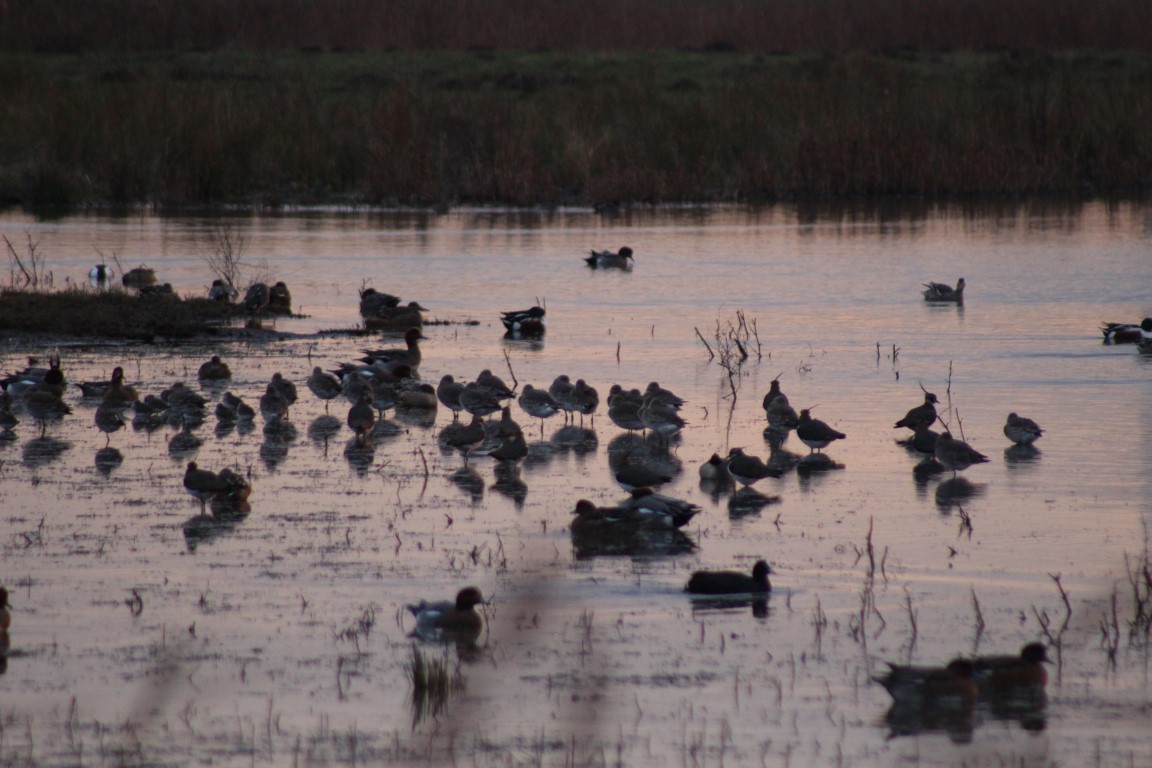 I count: Wigeon, Shoveler, Lapwing, Tufted Duck (top left?), Dunlin, Black Tailed Godwits, Coot – that makes 7.
On the way back the water turned golden as the Sun hovered over the horizon, providing some lovely duck silhouettes to finish off the evening. 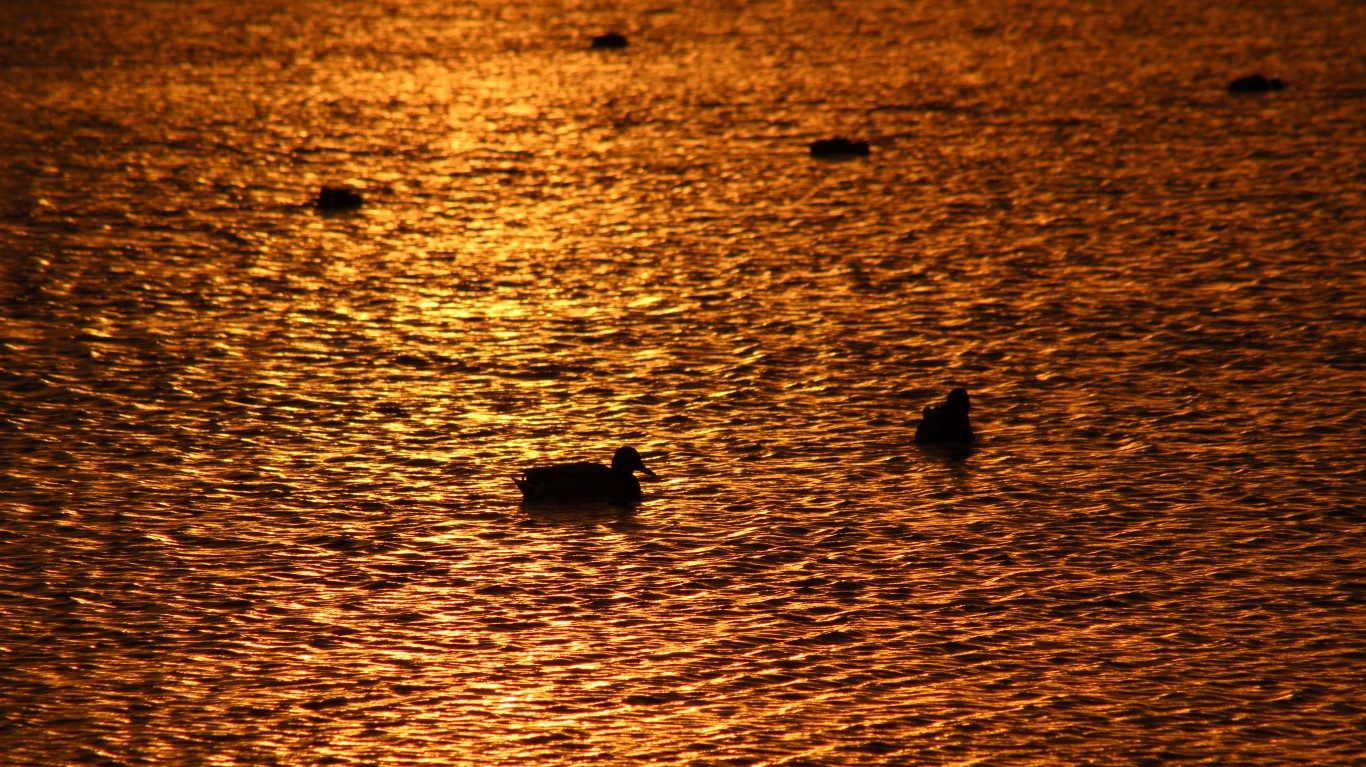 The reserve is right on the England-Wales border, so funnily enough, it is possible that on one side of the hide I was looking onto a Welsh ‘llyn’ and on the other an English lake! 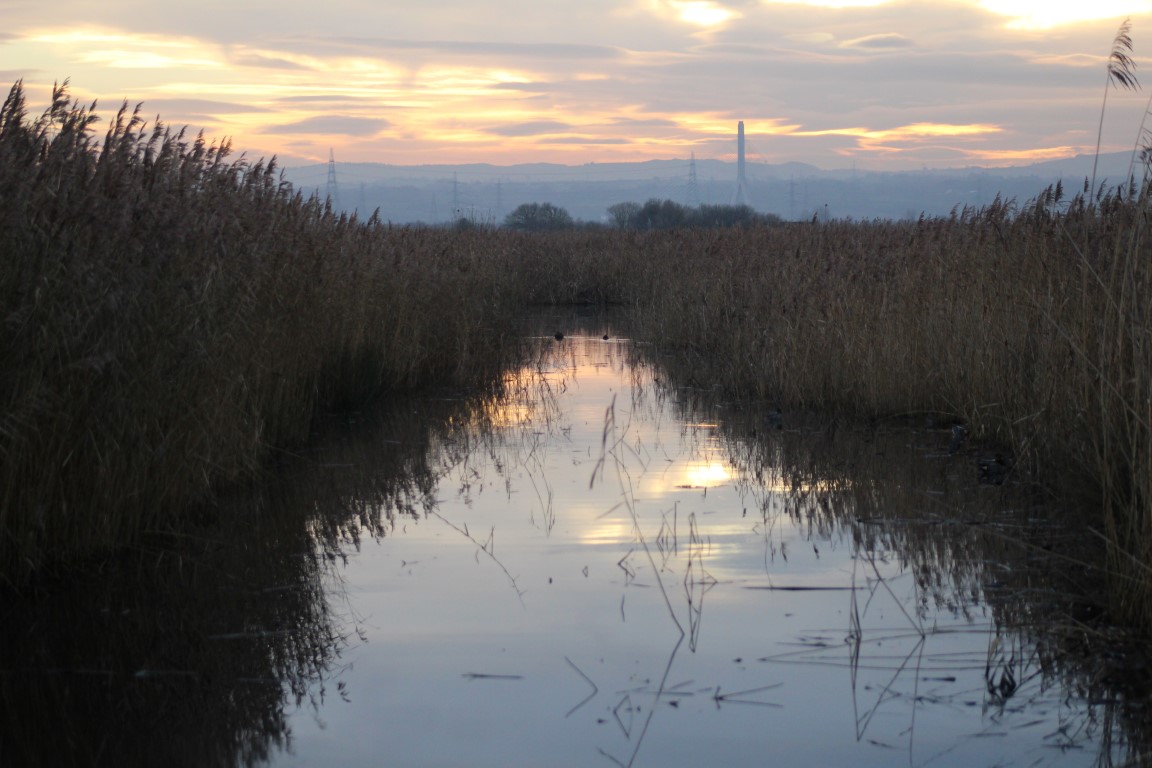 3 thoughts on “Birdwatching on the Wirral”