Iolo and I went to Glen Feshie to look for eagles (courtesy of Stuart Benn, RSPB)

Today was my day with Iolo, and he met us in the Steading after breakfast, accompanied by the RSPB’s Stuart Benn, who is the Communicating Nature Officer for Scotland. Together we all journeyed up to Glen Feshie in search of eagles. We stopped part way along the rugged road to have a scan about, and Duncan let us view three black grouse he had spotted through the scope that he had spotted. They were on their regular lek still    , although, seeing as it was 9.30, there were less than there would have been earlier and they were only preening their feathers. Still, they were an impressive sight. There was also a beautiful little stonechat sitting on some snowy gorse.
We carried on along the road to a quiet spot in the base of two valleys, a stunning landscape in the snow. After only a few minutes we saw our first golden eagle, which was soon followed by two more. They circled around each other, and eventually we could see all three in the same scope field of view! There was some aggressive interaction between them, with one eagle repeatedly swooping at another until the second flew away. We were then treated to an eagle’s display flight – it plunged downwards at speed before spreading its wings at the last moment and slowly ascending again. It repeated this routine several times in front of us before disappearing behind the mountains. 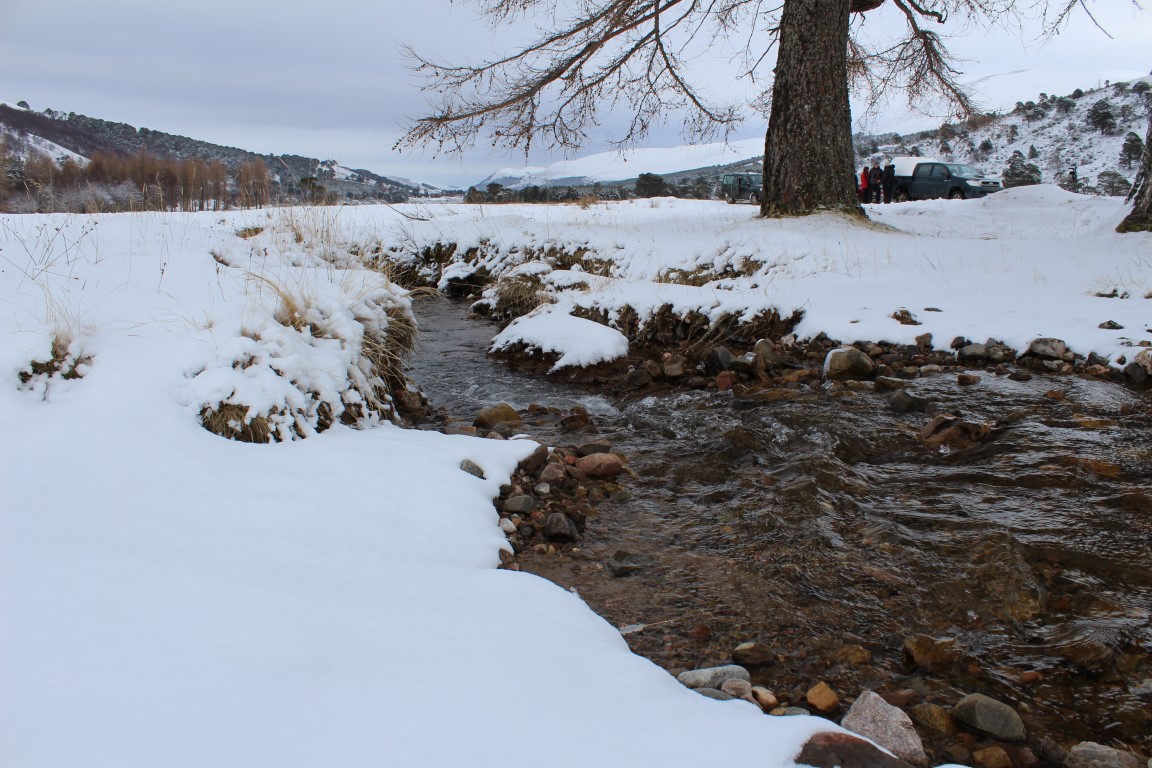 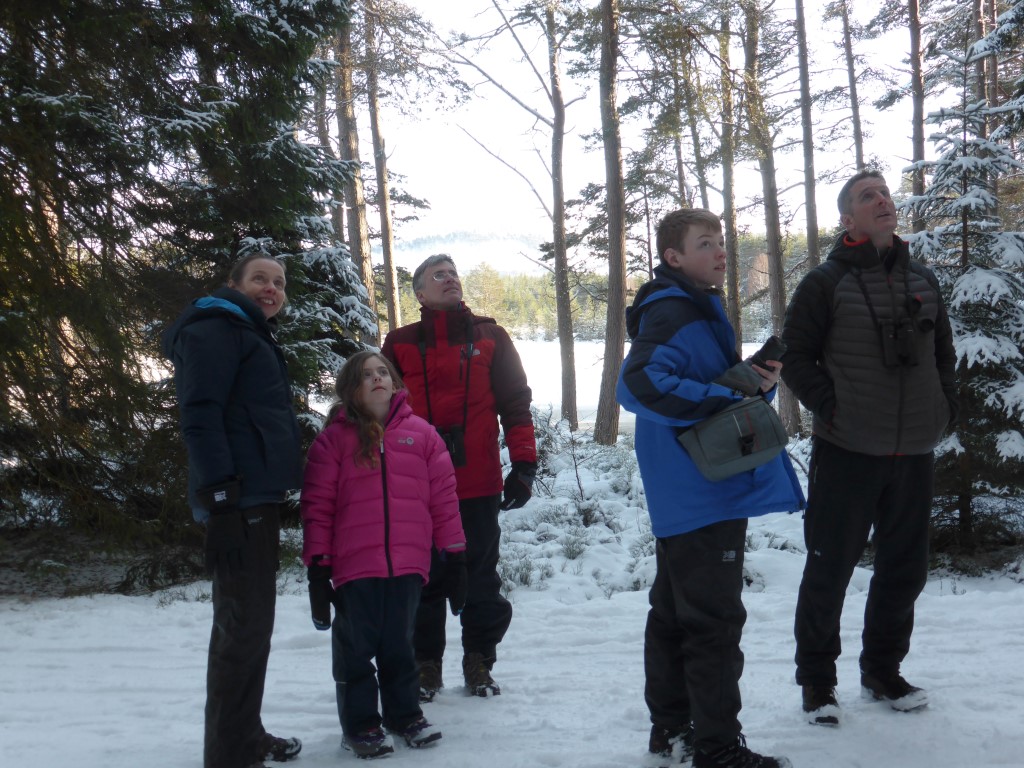 What a morning! It couldn’t have happened without collected knowledge and ‘eagle eyes’ of Stuart (who is an expert on golden eagles), Iolo and Duncan. James Shooter also filmed this moment, as well as recording me talking about an interesting trail of fox prints I had discovered that crossed a stream.
We then returned to the Steading for lunch (Sharon’s sandwiches and cake) and talked about a whole range of topics with Iolo and Stuart. They are both extremely interesting, knowledgeable, and, above all, genuinely nice people.
Hunger satisfied, it was time to head out yet again on a wildlife expedition, this time to the Uath Lochans. This series of lochans looked phenomenal in the snow – a real winter wonderland landscape. 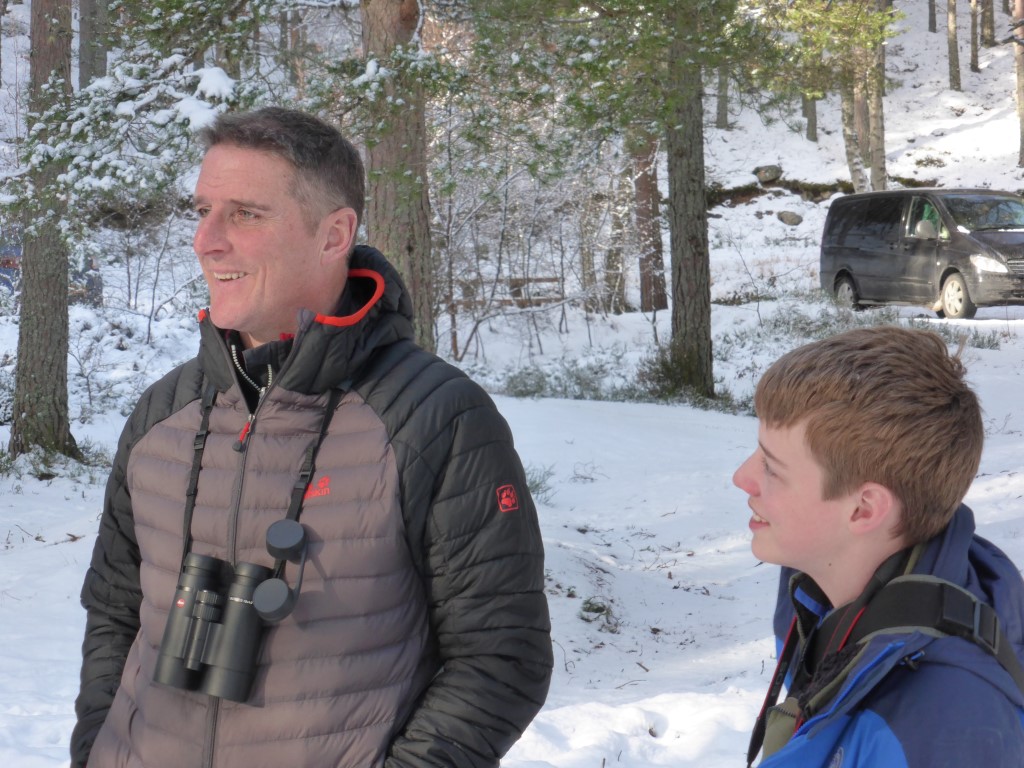 The lochans were all frozen over and sparkling in the sunlight, and the boughs of every tree were weighed down by the immense amount of snowfall that had fallen over the past few days. Although the woods were quiet, we found many animal tracks, several which Duncan suspected of being left by some type of mustelid (the carnivorous mammal family that includes weasel-like creatures such as otters, stoats and pine martens). I talked with Iolo for most of the walk, and he told me more about his previous careers and experiences before he became involved with the media. It turns out he was an RSPB warden for many years, doing a whole variety of jobs for various people, including being a Wildlife Crime Officer – investigating cases involving crimes such as stealing the eggs of protected birds and poisoning of raptors. After Iolo was became RSPB regional co-ordinator, he began to be noticed by the media as an expert on Welsh wildlife and eventually was asked by the media whether he would like to work with them. He was not immediately attracted to the idea, but after consideration he decided to give it a go, and has been working in broadcasting ever since… 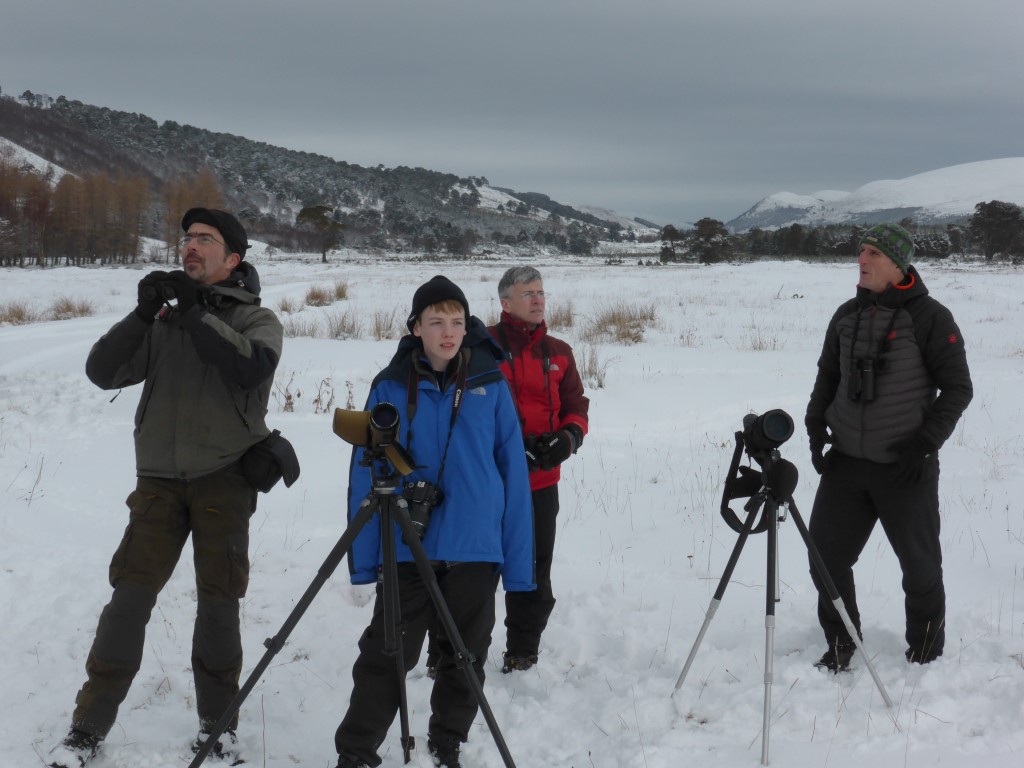 Iolo and I filmed a short piece before heading back, where we were met by a nice couple with an enthusiastic dog. They recognised him from Springwatch and asked for a picture with him, and he obliged. Afterwards he said that he appreciated the fact that so many people watch nature programs and that it is a good sign. 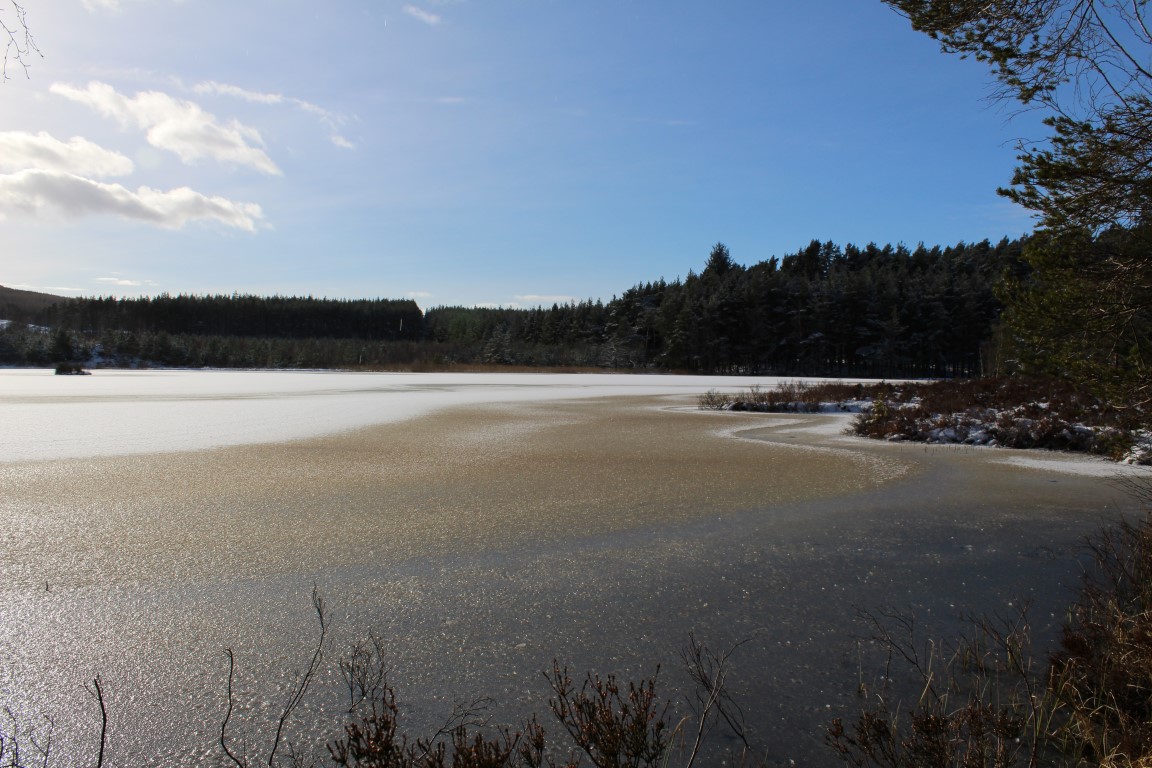 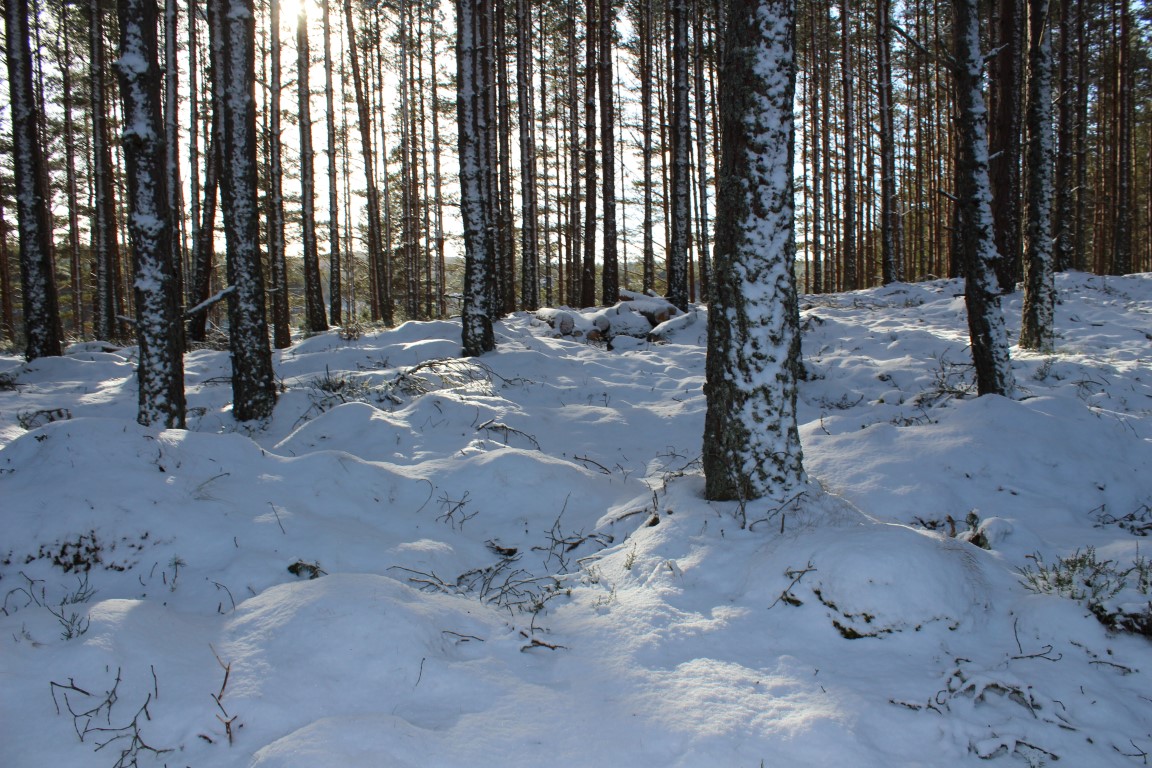 Finally, once we had reassembled at the car park, we realised we were getting late and sped off back to the Steading for the BBC Scotland Radio interview. As the radio team hadn’t arrived, James Shooter took me and Iolo off to do a short bit of filming on Cairngorms wildlife, which unfortunately I hadn’t prepared for, and struggled slightly, despite his encouragement and easy-going

attitude.  We were then called back from the forest to have a picture taken for the local newspaper.
We then waited for a while whilst Duncan did his piece for the media, and  I played with Peter Cairns’ dog and talked to Charlotte Milburn, who represents the Cairngorms Park Authority, which was one of the hosts of the competition. I already knew her from various email exchanges, and she has kindly supported me a lot since I won, trying to put me in contact with several people and inviting me to judge the competition for next year – thanks very much, Charlotte!
The rest of my family were away with Peter (who had turned up and introduced himself while I was filming) feeding his highland cattle. As soon as they returned we decided to move on to RSPB Insh Marshes, where we hoped to see hen harriers coming in to roost. The radio team were texted and told to meet us there; we didn’t want to sacrifice the evening’s event for an interview. However, as soon as we reached our vehicles, there BBC Scotland was – in the form of Moira Hickey, a radio reporter based up near Inverness. She had got a bit lost on the way, which is not surprising as the roads up there can be confusing.
We were still anxious about the time, however, so she kindly agreed to join us up at the Marshes. Unfortunately Iolo had to leave us at this point for a seven hour car journey back home – I didn’t envy the poor man.
At the Marshes, we were joined by two RSPB workers, Patrick and Cameron, who monitor the hen harriers there. They took us up to a hill overlooking the reserve. Within a reasonably short space of time, we had a hen harrier in our sights, perched on a dead tree in the far end of the reserve. Patrick and Duncan soon had their scopes on it, and let us watch as it left its perch. It proceeded to fly backwards and forwards across the marsh, repeatedly swooping down as if to land before pulling away at the last moment. After a minute or so of this, it was joined by a second, and they both circled the area together before individually dropping down into patches of reed. Throughout this amazing encounter, Moira interviewed me, my family and Duncan, and despite the cold that was making us uncomfortable, she stuck with us until the last harrier settled down (she was only layered up to a fleece, it must have been even worse for her!). She really deserves a medal and our thanks for her dedication and friendliness.
Once the last of the harriers had disappeared, we returned to the Steading for dinner. This time we had Sharon’s son, Darren, to thank for a delicious meal. Afterwards we went up to the Steading’s beautiful two-tier lounge to relax and discuss the day’s events, before heading to bed. 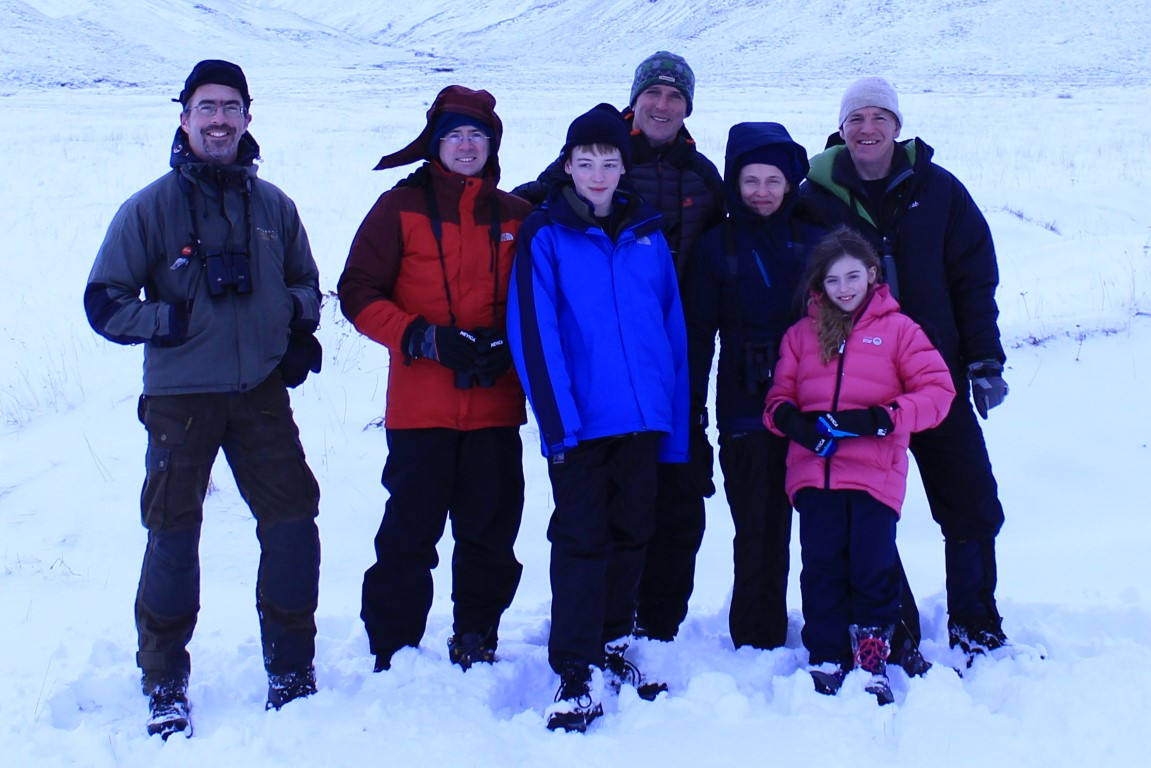