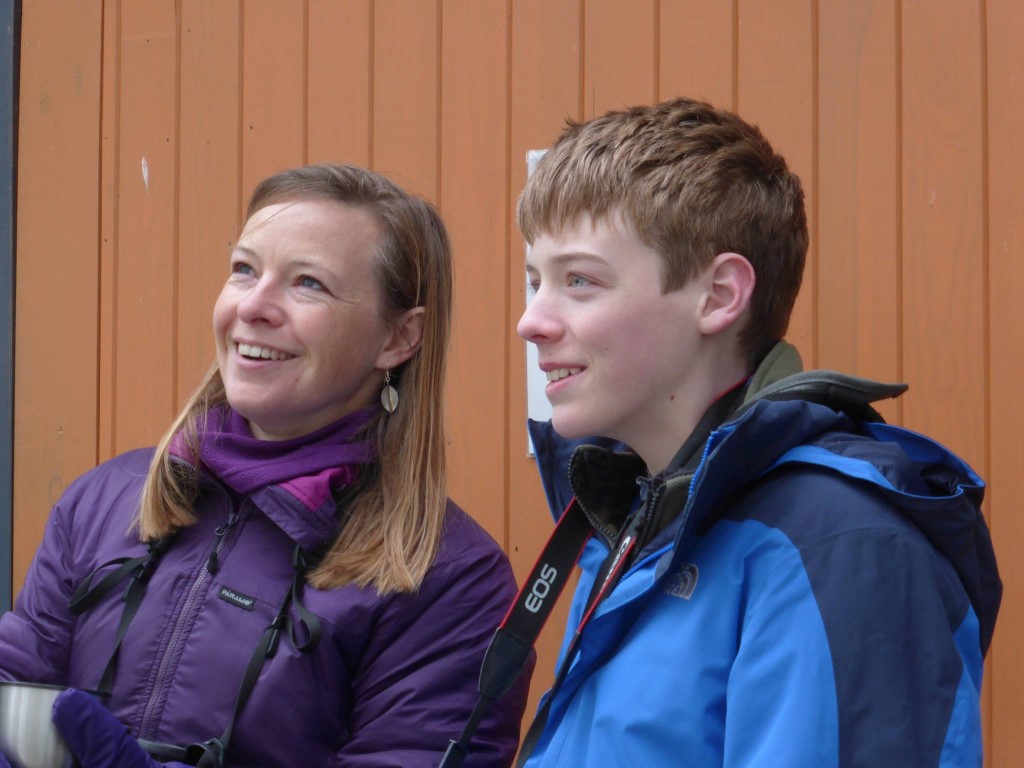 DAY 4: Today the forecaster predicted that the weather was in for us again. However, it held out long enough for us to enjoy the day, and get some great close up views of some Scottish wildlife.
We kicked off with a visit to Broom Hill Bridge, a known dipper nesting site. Unfortunately the wind was strong, and no dippers were about. Duncan did, however, point out a dipper nest, or rather what used to be a dipper’s nest – the recent storms had completely destroyed it. What would usually be an impressive dome shaped structure was now a collapsed and bedraggled shape plastered onto the underside of the bridge.
Undismayed, we carried on to Nethie Bridge, another site known for its dippers. Duncan spotted one on a rock, but before he could get his scope out it had disappeared. There was, however, a flock of siskins in the tree. Siskins are pretty yellow finches, which are rare down south; this was the first time I had ever seen one.
Then Duncan took us up to Dorback, a high ground moor where we had a chance of seeing both varieties of eagle. The wind at this point was so strong, it threatened to blow us off the road!. Eagles have such big wings that they could have coped, but there would be no point in them coming out in this weather. We decided after a while to cut our losses and head up to the RSPB’s Loch Garten, where we were scheduled to meet Stuart Benn again, in the company of the president of the RSPB, Miranda Krestovnikoff!!!
We met them in the carpark, and you could tell within minutes of meeting her and her family that they were lovely people. Together we headed to the osprey centre along a beautiful wooded path. But we weren’t here to see ospreys – it was the wrong time of year for that. We were here to see crested tits, and possibly red squirrels. 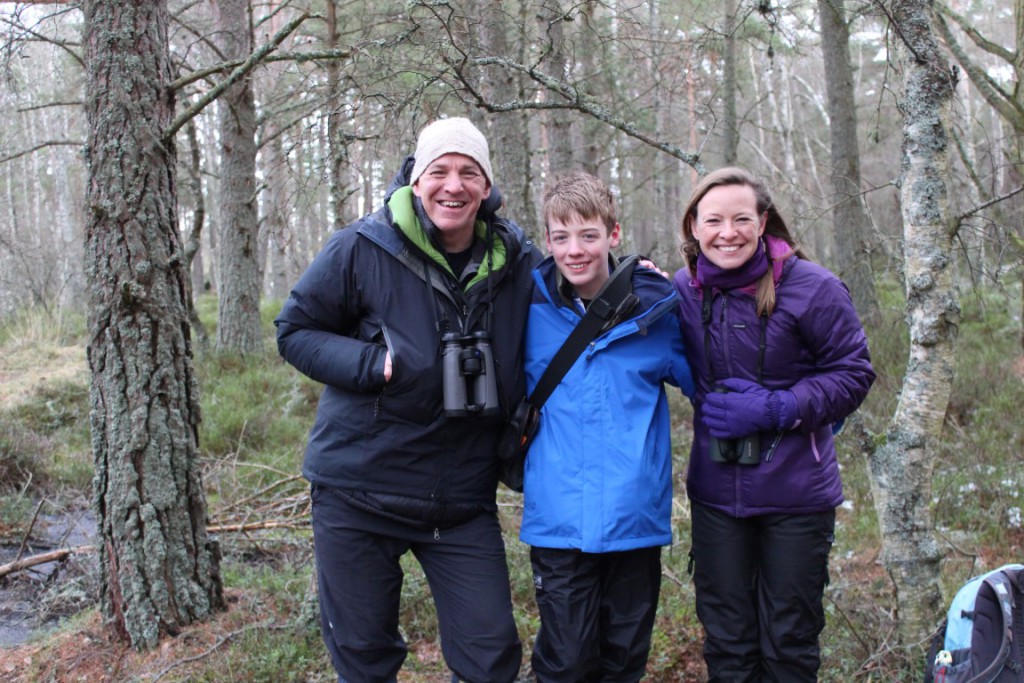 Stuart, me and Miranda

On the way I discussed with Miranda various things such as how she came to become a presenter. She herself had got into it through a long series of events – a very different way to Iolo. She studied zoology at Bristol University and then worked for the Natural History Unit of the BBC. She became interested in wildlife filmmaking, and started off as a ‘runner’ – doing various odd jobs on set to ensure it ran smoothly – and progressed through the rankings to becoming a researcher, who basically collects information and organises everything for the film. She then went on a course to become a director of presenters. However, when she turned up to the course, one of the presenters that they were going to practice on didn’t turn up, and she volunteered to be the presenter so others could practice on her. Her talent was recognised and she got her first presenting role in ‘World Gone Wild’. Since then she has been on several other programs, such as Coast and The One Show, where she makes regular appearances.
Once we reached the Osprey Centre, we found ourselves in the company of several photographers with impressively sized zoom lenses. They were all trained upon what seemed to be two dead trees. However, as we watched, birds started coming in their dozens, all landing on these two stumps. They seemed to be pecking at them. As I watched, slightly confused, a photographer explained that peanut butter and sunflower hearts had been stuffed into holes in these dead stumps – they were simply natural-looking bird feeders, ideal for photography.
The trunks attracted a variety of birds – mainly coal tits and chaffinches. However, as we waited, a crested tit flew in. This was the closest I had ever seen this iconic bird in the wild and it was stunning. It returned periodically to the feeder, often for extended periods of time, providing great opportunities for photos. It was also joined by a treecreeper – an equally beautiful creature, which I had seen before but not so closely. We remained there for a while, and Miranda distributed her own strawberry chocolate and hot drinks to everyone. Some incredible pictures were taken of the birds, not only by the photographers but also by Miranda’s children and by Duncan. It was a great time for everyone! 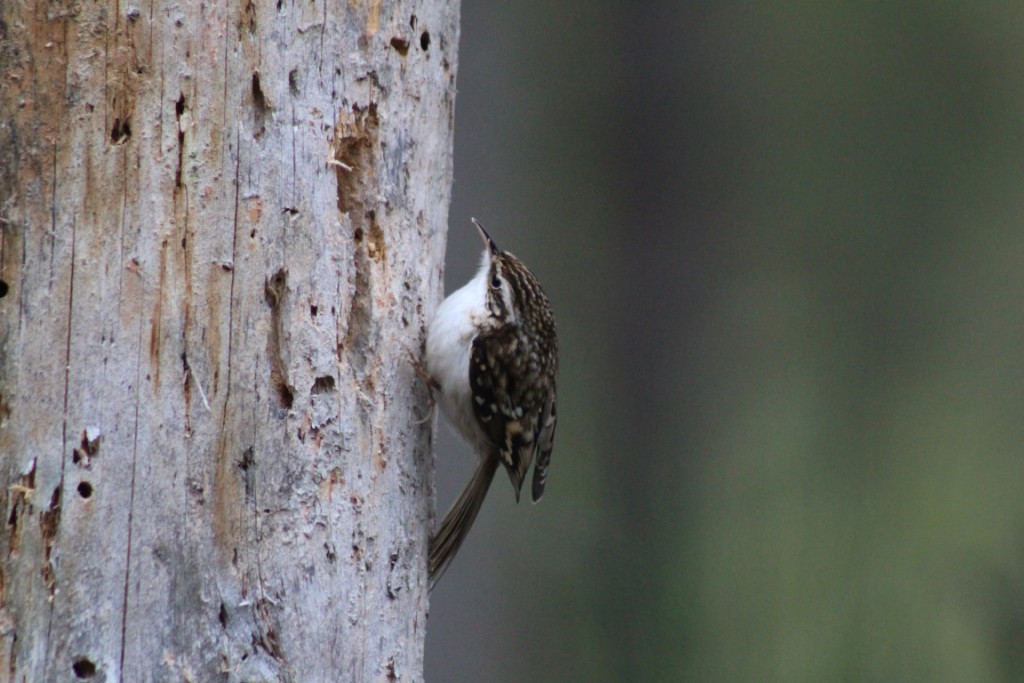 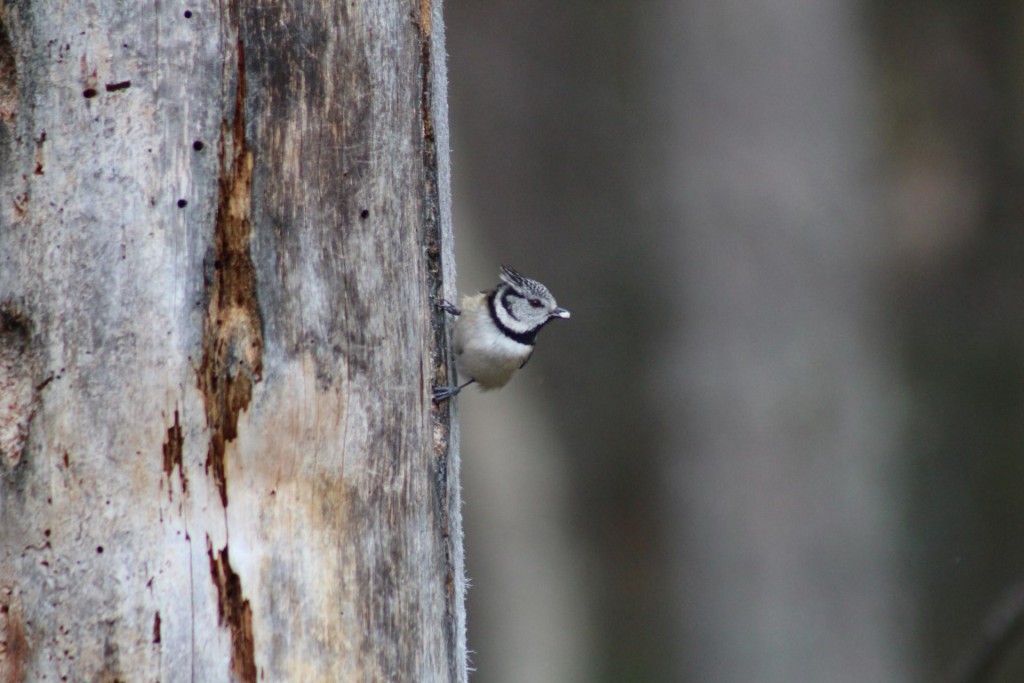 We then walked as a group to the car park and decided to continue to a local café famed for its red squirrel feeding station. Unfortunately we saw none as there was no food out for them at that moment. However, it did provide an opportunity to spend some more of the afternoon with Miranda and Stuart – we all enjoyed some hot chocolate and cake! We had then planned to go on a walk, but the weather had finally decided to obey the met office and do what it was meant to – be awful. So we called it a day and said our goodbyes, each going a separate way. It had been another great day, spent with such great people – even in such a short meeting with Miranda you could see that nobody was more deserving of the role of RSPB President than her. To conclude this amazing afternoon, Duncan took us to ‘The Lookout’ – a comfortable hide overlooking Insh Marshes. We spent about half an hour there, where we saw various groups of wonderfully coloured whooper swans, another hen harrier, and a roe deer!
Back at the Steading we met Speyside Wildlife’s Cath, who is in charge of marketing and publicity. She was very nice and offered to help me set up my own blog, which is something I have been meaning to do for a while – now I’ve finally done it! 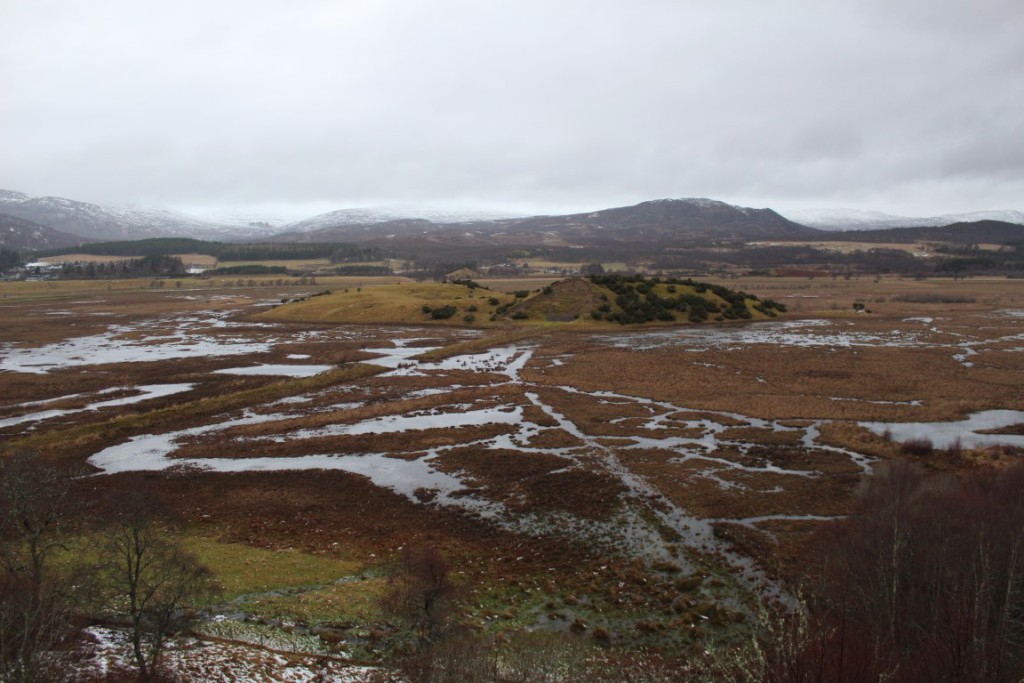 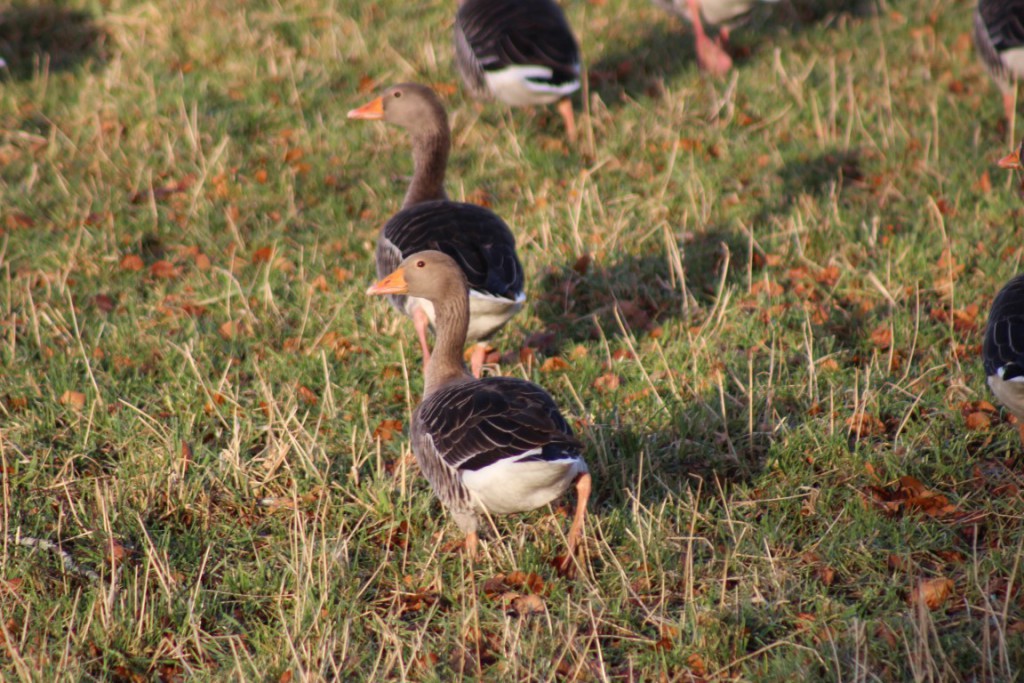