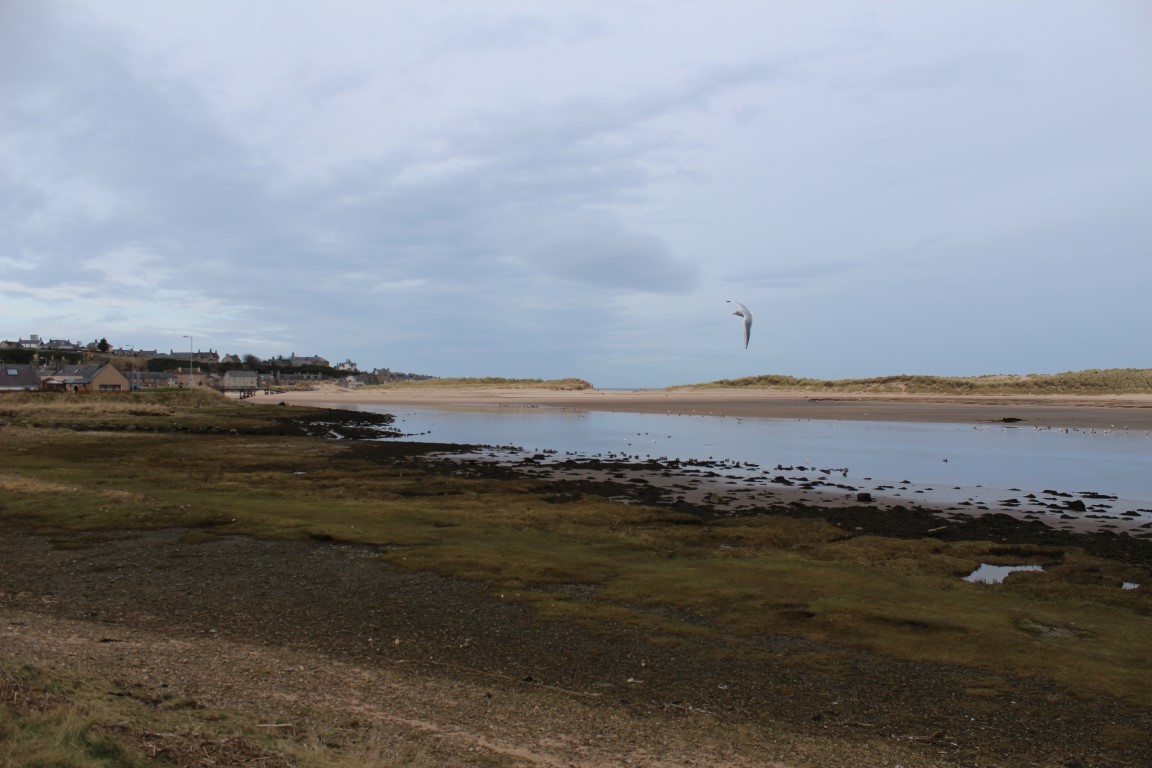 DAY 5: We got up a little earlier this morning to head down to the coast. It was a reasonable drive, just over an hour, but Duncan explained something very interesting which entertained me for the whole journey. He said that you could tell the sex of a mole by only looking at the molehills it makes. Territorial males tend to dig holes in straight lines, whereas a female’s molehills will appear as a random cluster. So I spent the rest of the journey looking at every series of molehills we passed, and trying to determine the sex of those moles. I also kept an eye out for buzzards (and other birds of prey) on the roadside, and we saw loads!
Soon we arrived at our first destination: Loch Spynie, which is near Elgin. Here we had a chance of seeing otters, as well as a variety of waterfowl. Although we suspected an otter was around the corner (judging from the sudden panicked flight of a lot of birds), we didn’t see it. We did, however, see a good deal of other things – a little grebe, several cormorants, many mute swans, a flock (or wedge, using the precise collective noun) of whooper swans flying over, many tufted ducks, some goldeneye, a moorhen (which is, although common in England, a bit rarer up in Scotland), and some coots. In addition to these waterfowl, we also saw a good deal of birds on and around the bird feeder – chaffinches, blue tits, great tits, long tailed tits, coal tits, and a great spotted woodpecker. We also had our second sighting of a red squirrel on those feeders, but it was too quick for my camera. Finally, a few reed buntings emerged from the reeds and obligingly posed for some pictures. 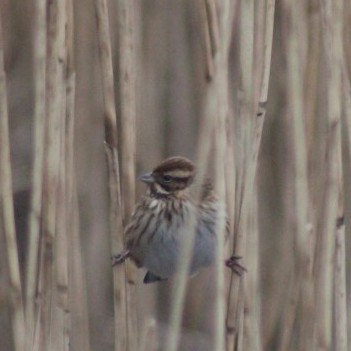 We then progressed onto our second site of the day – Lossiemouth, a town famed for its RAF base. It also contains a beach great for waders, with a shallow inlet and some sand dunes. It was full of birdlife when we arrived – hundreds of widgeon, a few curlew dotted about, some black tailed godwits, some redshank, and an absolute plague of black headed gulls who made numerous attempts at stealing our sandwiches (I don’t blame them, the sandwiches were delicious). All the birds seemed to be getting along (apart from the quarrelsome gulls) and it was great to see all the godwits and redshanks probing at the ground in harmony.

Pleased by our success so far, we crossed the footbridge onto the sandbank with the sand dunes. Here we spent our time divided between ‘moon jumping’ and birdwatching. Moon jumping is something Duncan taught us – you run as fast as you can until you reach the edge of a sand dune then launch yourself into space as far as you can. Your impact is cushioned by the soft sand beneath and it’s great fun.  Meanwhile, Duncan located a great many things in his scope for us, including stunning long tailed ducks, colourful eider, teals and common scoters. Whilst all this was going on, the curlews treated us with their exquisite song – a high pitched, excited, bubbling and whistling sound. As well as this, Duncan picked out the call of a rock pipit, but we couldn’t find it.

Once we were adequately sandy, we decided to make our way to our next location – Burghead harbour. On the way, however, we became distracted by a flock of small, finch-sized birds on a telephone wire. After some skilful manoeuvring by Duncan in the van, we parked in a small pull-in spot and had a look through the scope. They were linnets, hundreds of them, all sitting on a wire overlooking a field. Among these linnets, there were also several goldfinches dotted about, and a slightly more out of place mistle thrush. In the field behind, there was also a substantial flock of redwing.  What a great variety of species you can see by pulling in at the roadside!

Once we had identified every species visible, we realised the time and saw that we would only have about 15 minutes at Burghead before we would have to leave. So we set off again immediately, and within a short space of time we had parked at the end of the old harbour wall. Fortunately (in a way), there was practically nothing in sight (except for a few knot), so our very limited window of time didn’t matter. At least that’s what we thought, but at the last moment, just as we were about to turn away, a fin emerged from the water in front of us and then dipped back under again. This was then followed by three or four more fins – a pod of dolphins! We only got a short glimpse of them before they disappeared around the corner, but any day that you see a dolphin on is a good day.
We returned to the Steading for dinner with the founder of Speyside Wildlife, Sally Dowden. She, like everyone we have met on this holiday, was really nice. And of course she was one of the people I have to thank for giving me the opportunity to be up there. The story of how she set up the company is a very interesting one. She told me that one day her business partner simply decided that they would move to Scotland. At first she was entirely against the idea, but since moving up to Nethiebridge she fell in love with the place – she says that now she wouldn’t live anywhere else (and I can see why she feels that way, I’m starting to be affected by it as well). Her business started off small; she had small parties of wildlife watching enthusiasts stay at the house, and she would cater and have them taken about the local area. Since then, her business has grown immensely – she now employs many guides and runs trips all around the world.
She presented both me and Sophie with another present in addition to the free holiday – our own Speyside Wildlife 25th anniversary shirts! She also invited me to come and do a talk in Speyside’s marquee at the Birdfair this year – what an honour! Duncan kindly said that I could do it with him if I wanted to, which I readily accepted. It is great that the rewards from the competition that I won don’t stop at the end of the holiday.
To conclude our final day in the Cairngorms, Duncan had booked us in for another visit to the pine marten hide, seeing as we weren’t too successful last time. This time we were joined by, about seven or eight members of the public who had already booked the hide. We were lucky enough to grab the few remaining places – only around 12 are allowed in the hide at a time.
This time we were more fortunate – there were two badgers about. One thing that I immediately noticed about the badgers was that they somehow looked different to those we see in the South. The Speyside guide who was running the hide that night was John Grierson, who explained that northern badgers are a lot smaller than the ones that I would see in England. There was something else as well as that though, something possibly to do with its head and body shape and proportions. I still can’t quite put my finger on it…
Anyway, despite not seeing any pine martens again, it was great to share the hide with people who were excited and interested by the wildlife we saw. Most of them were children, which is a good sign – we need more people like that in our generation. 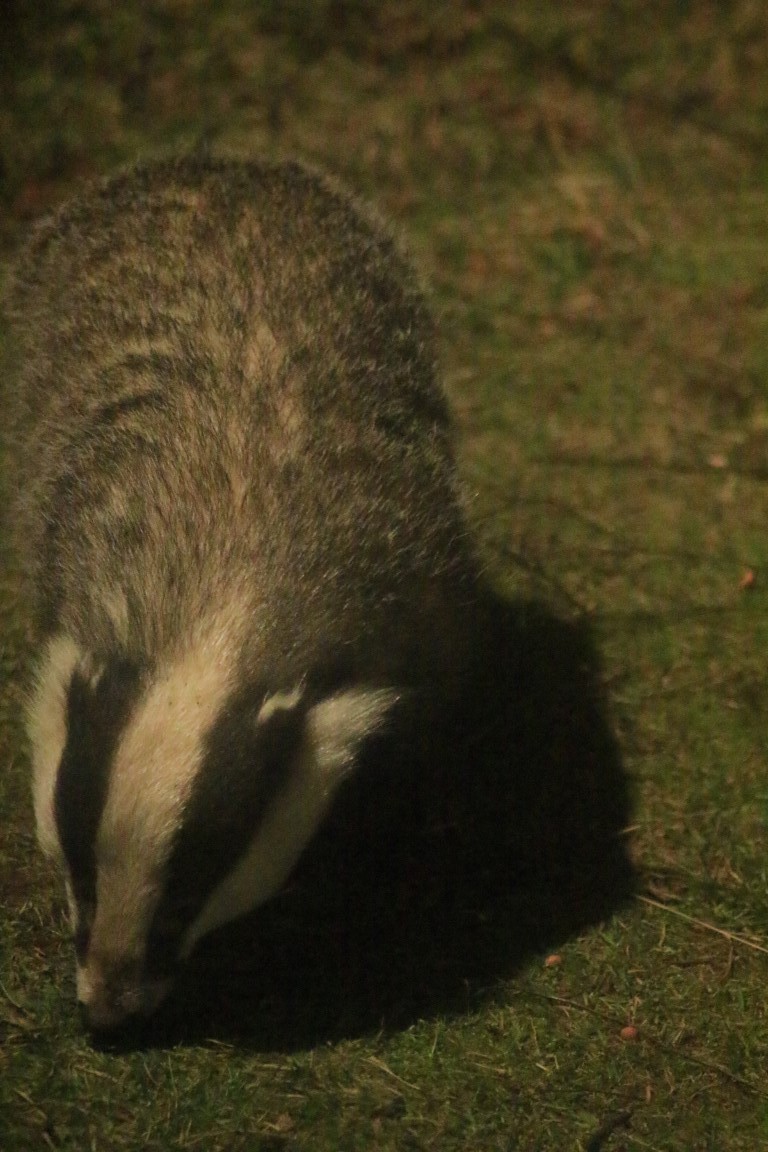