In December of last year, Japan announced that they would leave the international whaling commission and resume commercial whaling. This caused widespread dismay and anger across the rest of the world, and several protests have been staged to express international feeling.
At the protest in London in January, Boris Johnson’s father and girlfriend both spoke out against Japan’s decision, as did Bella Lack, another young environmentalist and campaigner. This June, Dominic Dyer, who organised the protests, invited me to do the same. 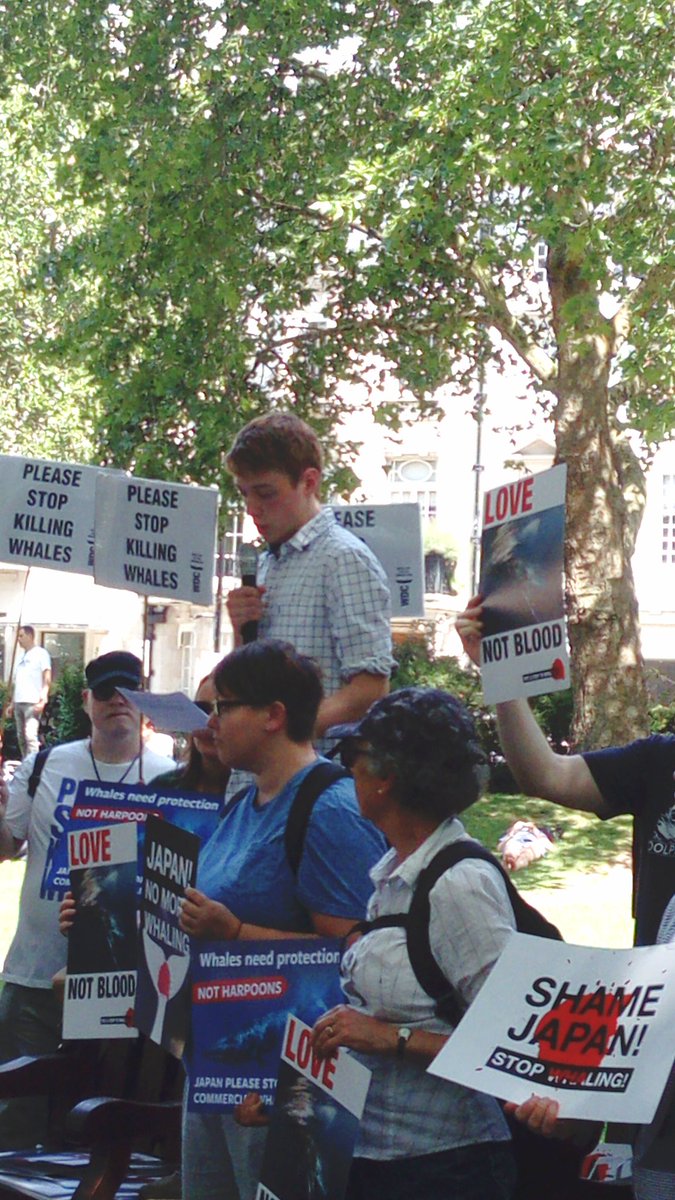 I share the same concerns over whaling as most people: conservation and ethics. Whaling is very worrying in both these regards.

In 1986, a moratorium was declared on whaling for the very reason that these animals were being driven to extinction, with at least 5 of the 13 Great Whales listed as endangered.  This was the result of decades of hard campaigning from NGOs and the public, and I know people who remember those original marches in London (that are, in fact, recognised as one of the first actions that spawned the modern environmental movement).
This moratorium wasn’t perfect – some countries, such as Japan, have continued using the loophole of being allowed to whale for ‘scientific research’, while others, such as Norway and Iceland, have refuted the ban entirely and continued unrestrained. But the policy did allow some species to recover and is considered one of the greatest conservation successes that mankind has achieved.

While many whale populations are recovering, this is no reason to assume that they’ll be safe in the future. 8 of the 13 Great Whales are still endangered or vulnerable, and with overfishing, ocean plastics, climate change and other environmental stresses are becoming a severe threat to these creatures too, we shouldn’t be taking any risks. Historically, over a thousand have been slaughtered each year despite the moratorium.
Fascinatingly, whales also make a not-insignificant contribution to preventing climate change. This is partly due to their movements: as they dive they stir the water and can send sinking phytoplankton to the surface, allowing it to bloom and sequester carbon more effectively. They also unleash faecal blooms – pretty self-explanatory – which provide essential nutrients for the phytoplankton (Southern Ocean Sperm whales alone are predicted to sequester 400 000 tonnes through this process). Even in the simple act of dying and sinking to the sea floor whales could remove an extra 160, 000 tonnes of carbon should their populations be rebuilt.

These are the largest, most awe-inspiring creatures to have graced our planet, besides being a hugely important link in the ecosystem, and their loss would be an irredeemable blot on the history of mankind.

Besides the very real possibility of losing some of these species, I find it abhorrent from an animal welfare perspective as well. These are some of the most intelligent creatures on the planet! They can transmit about 20 times the amount of information by sound that we can in the same period of time – this allows for extremely complicated communication that we don’t yet understand. They have local dialects and local songs, which change gradually over time. This, combined with the fact that they teach this information to younger generations, has led scientists to describe these animals as having culture.
From these sophisticated social interactions has arisen the development of a highly complex mind. Whales have a limbic system (the part of the brain that deals with emotional responses and memory formation) which is far more developed than ours, suggesting that they could have an emotional intelligence that is comparable to our own. There is a huge amount of anecdotal evidence to support this too.
Simply because these animals have evolved in an environment that doesn’t allow technological progress (after all, try lighting a fire underwater) doesn’t mean that we should immediately discount their intelligence.
And these creatures are being slaughtered in the most horrific ways; with exploding harpoons that take minutes to kill – sometimes up to 25. The killing is indiscriminate – Japan killed 122 pregnant Minke Whales in a single ‘survey’ last year.

There is no way that this practice can be morally justified. And it seems very little attempt is made to – most often the governments respond by criticising our own ethically questionable farming methods.

So why does Japan continue to whale?

The answer most often given, is that it is ‘traditional’. This is, in itself, invalid and insufficient for such an argument. Slavery and fox hunting were ‘traditional’ but we as a country have moved on. The elimination of cruel and damaging practices is part of the progress of humanity, and something to be celebrated, not fought.
And even this excuse is debatable – although a number of coastal communities have whaled for centuries, the majority of Japan has only hunted whales since WW2, when the country was struggling to source protein. In fact, the vast majority of the demand for the meat now comes from the wartime generation who find eating it nostalgic. The market is vanishingly small, and ever decreasing. In 2015 the average annual consumption in Japan was just 30g, and thousands of tonnes of frozen meat are stockpiled, uneaten. The demand is so low that the Japanese government is subsidising the industry at $50 million a year. Now the government are actively running campaigns to try to increase public appetite for whale meat.

The real reason for continuing, shockingly, seems to be pride. The strong condemnation of whaling by foreign countries is seen as an assault on Japanese culture, and politicians are reacting in a petty way. When asked at a press conference, a Japanese government official responded very frankly, saying that whaling is a disaster for Japan’s national image, and that there is no commercial demand. He said that the reason that it hasn’t stopped is due to ‘important political reasons.’

It seems that the majority of the Japanese public are impassive to the debate, according to some of the Japanese journalists who interviewed me after I gave my speech. It doesn’t affect most of them personally, and therefore they haven’t made much of an attempt to change government policy. I was also told that they mostly don’t know the condemnation it provokes from the rest of the world, and that perhaps, if they did, they would feel differently.

So that’s a brief summary of the situation. Visit the UK whale and dolphin conservation website to find out what more you can do:

And to finish off, a bit of positive news! Iceland decided not to hunt whales this season, and the Prime Minister, an environmentalist, has expressed her opposition to it. MPs are split over whether to continue over the next few years or not, so we shall have to see what happens…