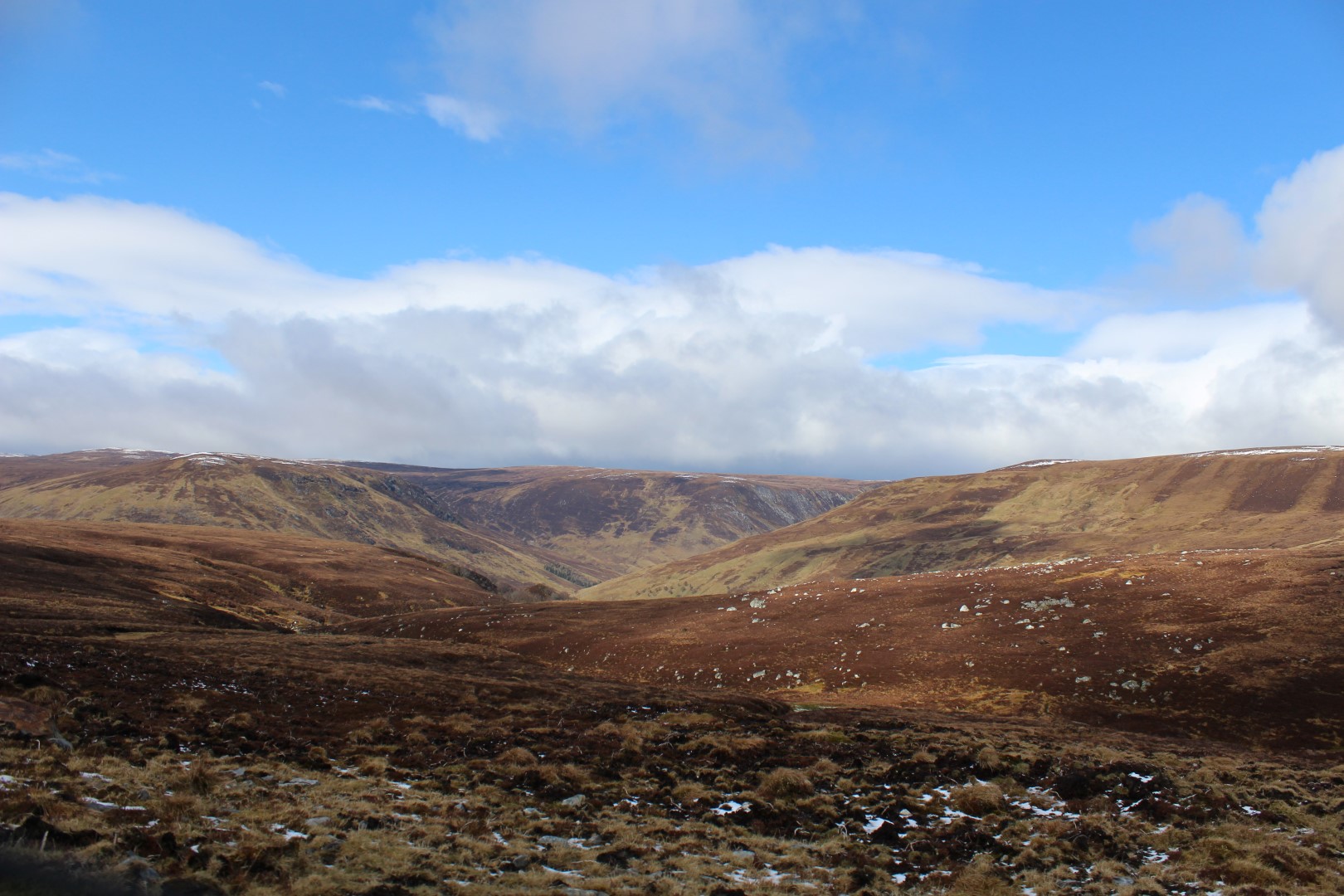 There is a major problem with our land. A problem with over 17, 000 km squared, a quarter of all our uplands, and nearly 20% of Scotland. A problem that contributes to climate change, kills tens of thousands of mountain hares every year, and is driving one of our most iconic raptors to the verge of extinction in the UK.
It’s not agriculture. It’s not housing. It’s not manufacturing, infrastructure or conifer plantations.
It’s a ‘sport’.

Specifically, it is a type of bloodsport called driven grouse shooting. It involves a line of beaters driving red grouse towards shooters, who then kill them as they fly past. The focus is on killing as many individuals as possible, and people who pursue the sport pay extortionate amounts of money to for a day’s shooting on a moor where there are the densest quantities of grouse. 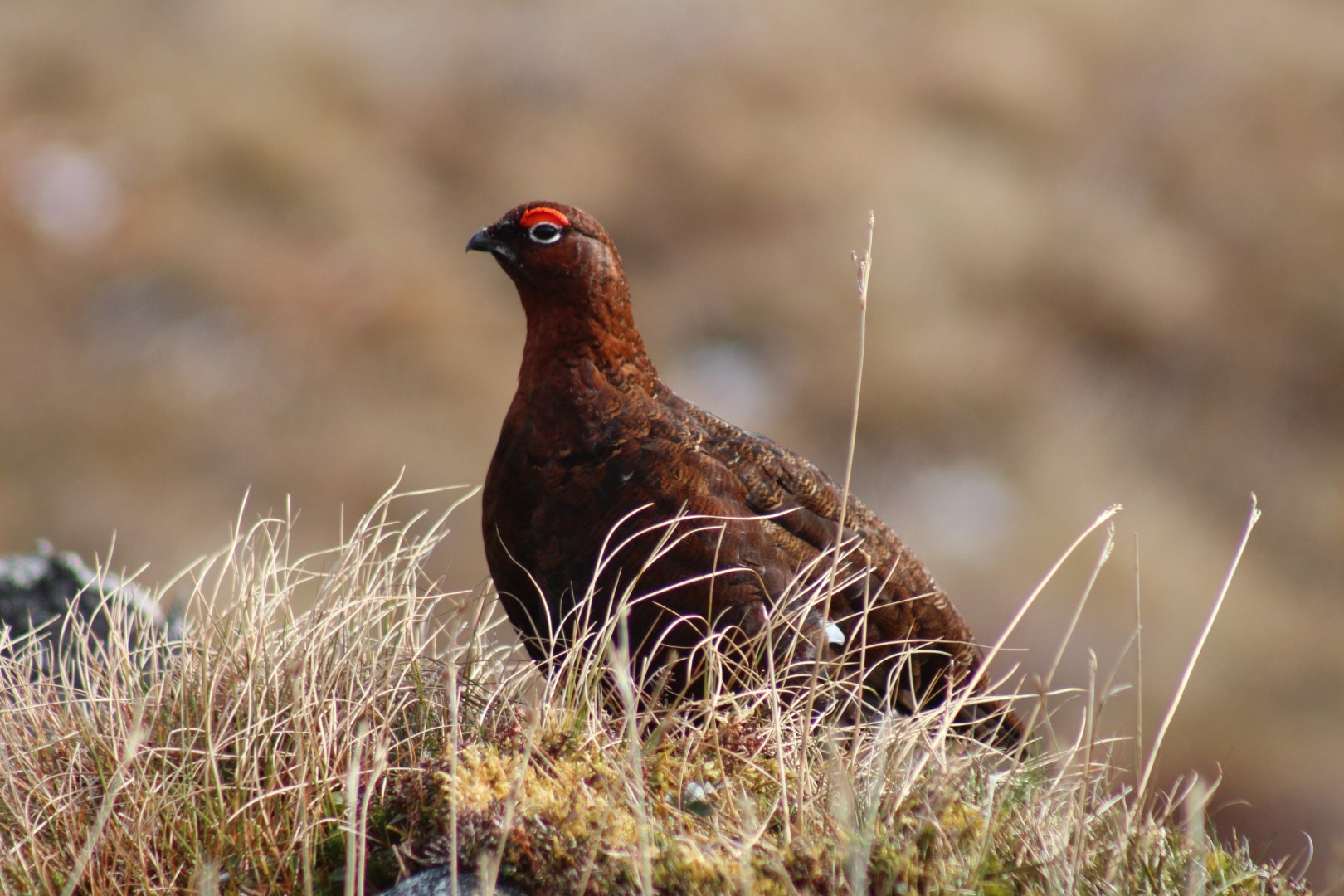 This encourages the landowners to manage the land to optimise Red Grouse numbers – the stem of all of the problems.
Artificially managing land for any one species is going to be environmentally damaging, and magnify this up to the huge area that the moors cover and there will be a significant effect on wildlife nationally.

Grouse eat young heather and nest in old heather, so the groundsman’s job is to create a patchwork of these two types of heather. To do this, the moor is drained and then burned to encourage growth. If you were to look at a grouse moor in Scotland you would be likely to see huge blackened strips across the mountainside – this is known as muirburn. The burning is becoming gradually more intense; the proportion of rotationally burned heather in national parks doubled between 1970 and 2000 (from 15 to 30%).
Burning destroys the heather (albeit temporarily) and exposes peat to the elements – to dry out or be washed away. UK peat stores about 5.5 billion tonnes of carbon – 31 times the UK’s annual emissions – and damaging it in this way releases 10 million tonnes of carbon into the atmosphere per year, and prevents that land from being used as a carbon sink. Thus land use on grouse moors contributes to climate change.

Draining the land lowers the water table, damages the peat and reduces invertebrate populations. It dries the land and makes it more susceptible to fires, such as the Saddleworth Moor fire in Greater Manchester on Jun 27th, which was described as an accident ‘waiting to happen’. While it is very difficult to set woodland on fire, drained heathland is a tinderbox. Such fires break out regularly, some started naturally, others artificially started to burn the heather but got out of control.

Creating drainage channels also makes the area more susceptible to flooding, because instead of the ground holding the water the channels quickly take all of the water away (as they are meant to) so they reach rivers faster and increase the maximum water output of the river. This is why in Yorkshire, residents of Hebden Bridge protest every year, because they blame their frequent and devastating floods on how the land above their town is being managed.

But there is also an intrinsic problem with keeping this moorland, in that it is not natural, and designing it optimally for grouse turns it into a monoculture of heather. Because such huge quantities of moorland are managed in this way the biodiversity of the uplands is severely restricted. Whether moorland is attractive or not is a matter of debate, but I think scenes such as the one below would look better if those hills were covered in trees. 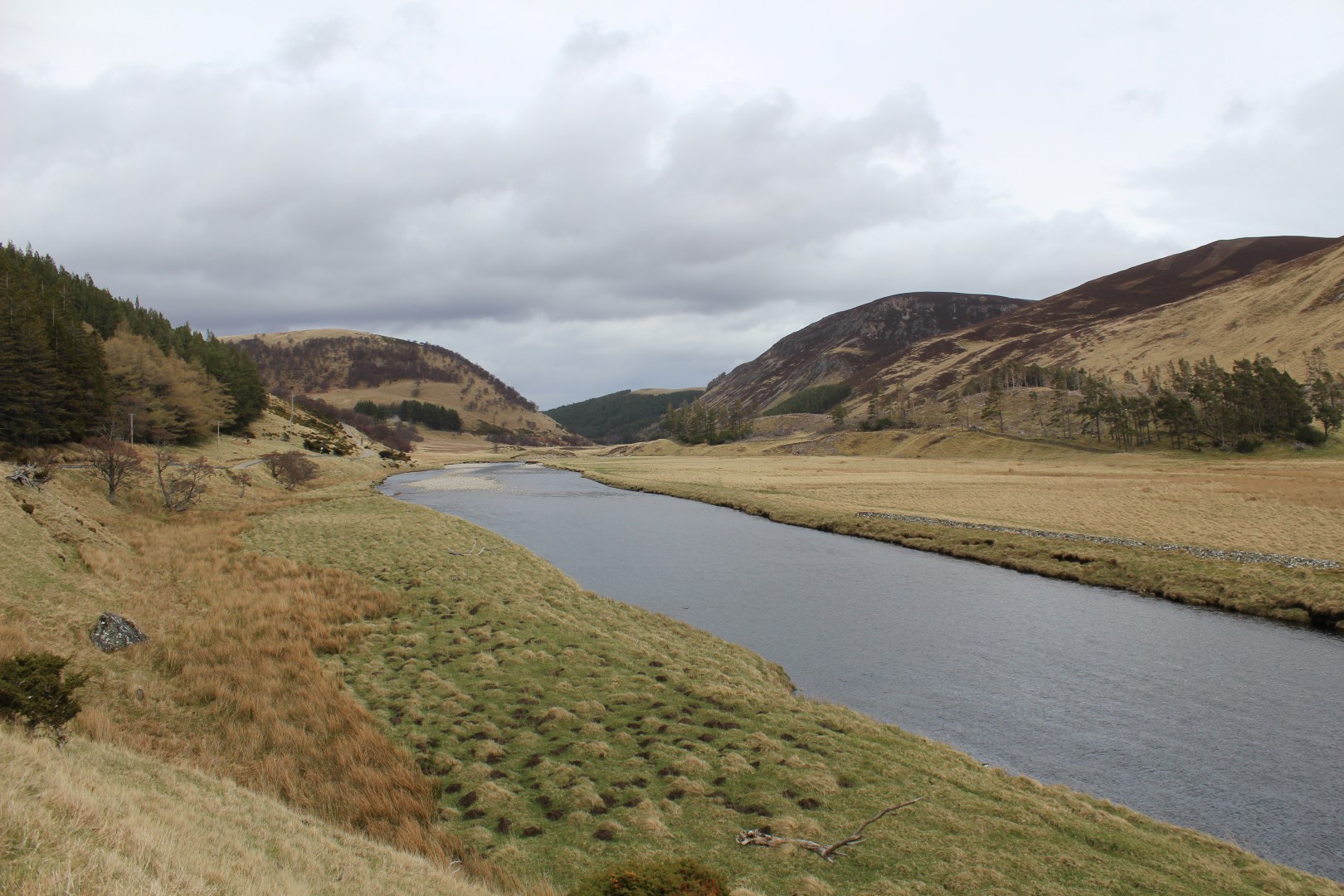 But driven grouse moors are perhaps most infamous due to their reputation for predator control.

In order to maximise grouse numbers, a logical (although unpleasant) step is to remove all potential predators of the grouse.
This is done in a variety of ways, both legal and illegal; shooting, poison on carcasses, snares and traps etc.

This is both a conservation and animal welfare concern. Whilst you may not think that a gamekeeper’s activities on his patch of moorland can have significant impacts on national wildlife populations, they can.
Here’s an example of animals killed on a single estate over 3 years, between 1837 and 1840:
475 Ravens
1,413 Hooded Crows
285 Buzzards
462 Kestrels
275 Red Kites
301 Stoats and Weasels
67  Badgers
And some true rarities by modern day standards…
27 White Tailed Eagles
15 Golden Eagles
18 Ospreys
63 Goshawks
63 Hen Harriers
106 Polecats
and, most shockingly, 198 Wildcats! With estimations of wildcat populations left as in the low tens, this is jaw dropping.

These figures just go to show how much our wildlife has plummeted – these figures are unimaginable by modern day standards. Driven grouse shooting isn’t the only culprit, but it is certainly one of them.
Of course, not as many animals are shot today, but that is because there aren’t nearly as many left to shoot.

And, disturbing to even those with little care for conservation, is the method in which animals are killed. Film footage evidence was produced this year of a ‘stink pit’ – where killed animals are left strung up from trees or in a pile, which attracts scavengers such as foxes, which then get caught in snares around the edge of the pit and eventually die, adding to the pile of rotting flesh. It’s a horrific sight.

Some of biggest uproars about have been in relation to mountain hares. It is estimated that 25 000 were killed in 2006-7 alone, and the species is in great danger, with an overall decline of 34% in 18 years, between 1996 and 2014. Clearly this level of culling is unsustainable. The SNP are even getting involved, calling the culls ‘unacceptable’ and considering legislation to protect the mountain hares. 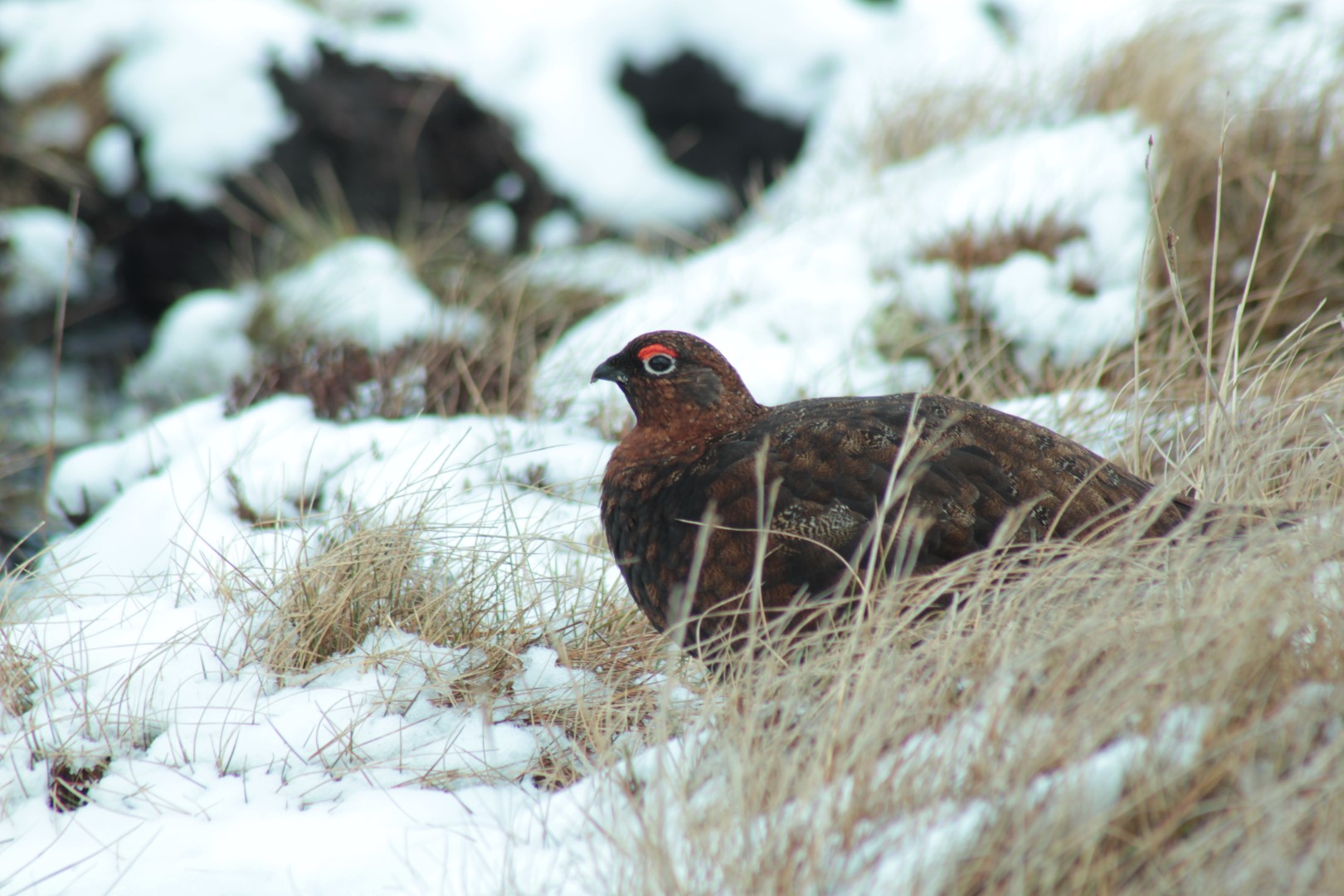 The greatest opposition has stemmed from raptor persecution. This is one of the illegal activities carried out on moors – raptors are all protected by law. However, this doesn’t stop them being shot, poisoned and trapped by gamekeepers to prevent them from feeding on the grouse. Most birds of prey are in decline, but none are in more trouble than the Hen Harrier, whose populations reduced from 18 to 4 in England since 1988, while there is potential in the England for over 330 pairs. Scotland could also house 1300 more than its current population.
2000 Hen Harriers are missing.

Is it necessarily grouse moors that are causing this decline? It’s almost certain. A quarter of all Hen Harrier nests are on grouse moors, but despite the abundance of prey, they are the least successful nests, raising an average of 0.8 chicks per nest compared to 2.4 on normal heather moorland. The nesting ratio would have been similar between the two sites if all of the ‘failed’ nests were discounted; these nests were often attributed to persecution, because of evidence of trampling, shotgun cartridges, or the nearby body of an adult.
Annual female survival on grouse moors is HALF of that on otherwise similar moors.

Satellite tagging raptors has provided evidence that illegal persecution frequently happens. Shooting communities claim that it is just a few ‘bad apples’. The declines that we see show that either many estates are killing comparatively few raptors per year or a few are killing very many. Either way, the impact on the population is the same and must be stopped. The trouble is, it is currently very hard to convict anyone, and a prosecution is rare.

Vicarious liability has been suggested, whereby land owners are held legally accountable for the actions of their gamekeepers, providing more incentive for the owner to ensure that his moor is managed legally. This would still, however, require successful prosecution to work, and wouldn’t get rid of other environmentally detrimental practices.

Another option would be to get rid of this practice entirely, however this would require a lot of effort and public opposition. 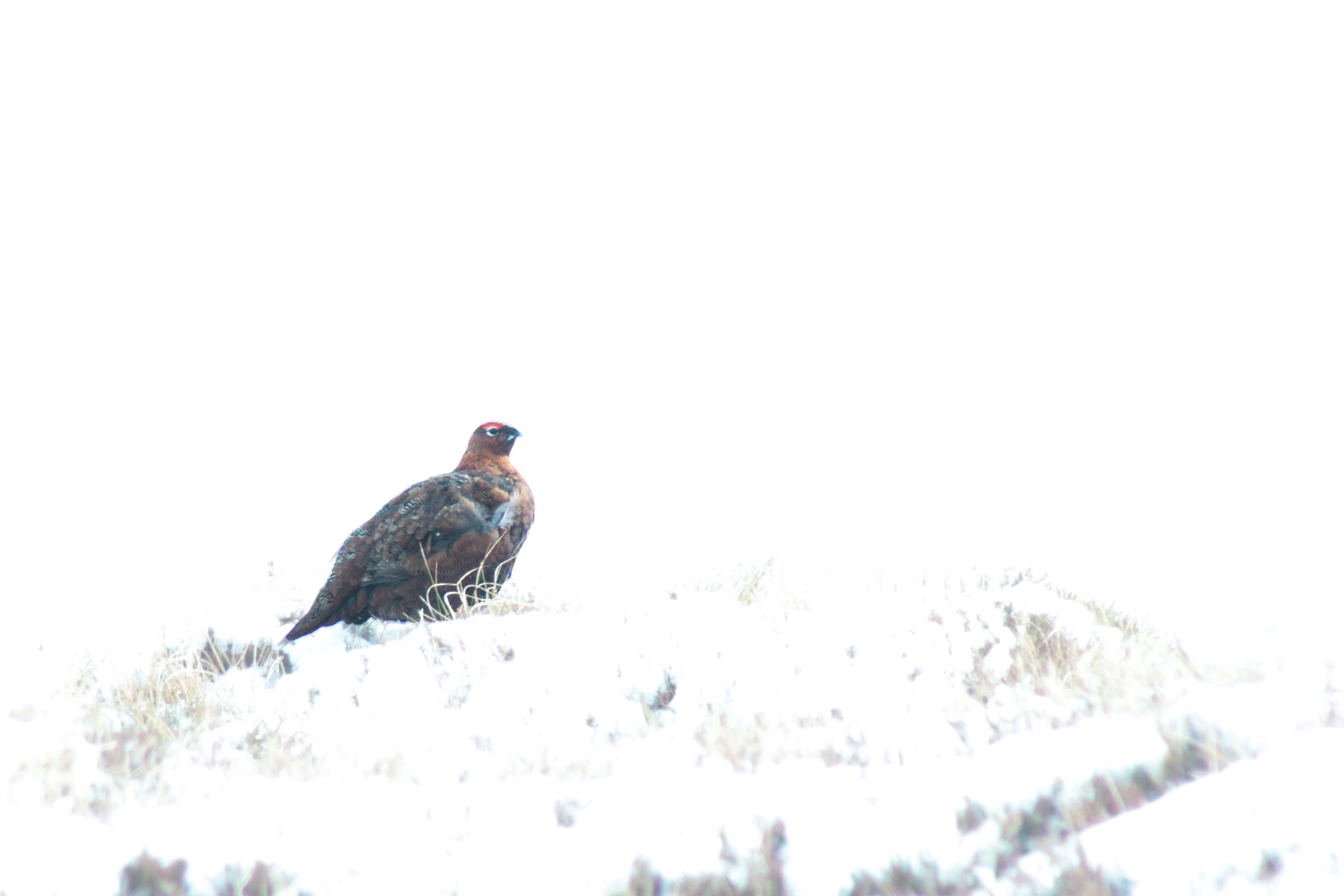 The main arguments that the pro-grouse shooting lobby put forward are that it:
a) Is economically important to the country (the government subsidises grouse moor at £56 per hectare because they are managing valuable land – as there are 1, 700, 000 hectares of moor, that’s a lot of taxpayer money. Estimates put money generated to the economy by driven grouse shooting at around £150 million (although estimates vary widely). So it either generates a minimal contribution, or in fact a slight drain. Far more could be generated by improving the landscape and increasing tourism in the uplands.)
b) Is important for waders ( True. But this isn’t a reasonable price to pay for the destruction of a vast amount of other important animals that are vital for a healthy ecosystem.)
c) Housing and industry would otherwise occur on the land and ruin the landscape (this is not the most likely outcome and in fact freeing up this land could have huge benefits for reforesting Scotland, rewilding the landscape and improving the ecotourism industry)

What Can You Do About It? 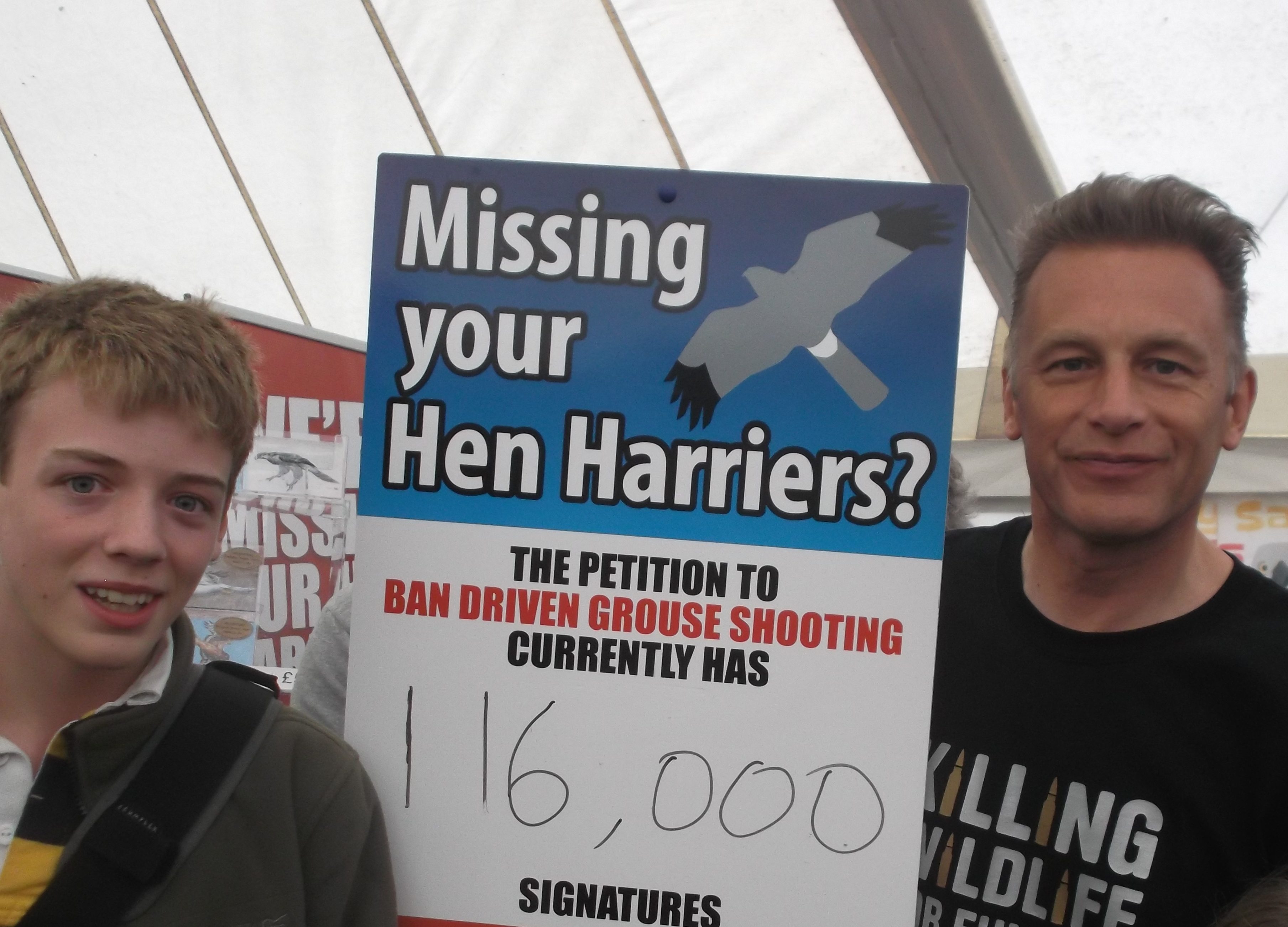 There are several ways that you can help.

As always, you can email your MP to express your concerns.
In addition, there have been numerous petitions to ban driven grouse shooting, the 2016 one reaching over 123, 000 signatures. Here’s a current one to ban it on Yorkshire Water -owned moorland.
A thunderclap has been set up by Findlay Wilde to spread the message and highlight public opposition – unfortunately this has now ended but on a positive note it reached over 8 million people -an incredible achievement. Keep an eye out for future thunderclaps.
Similarly it is now to late to attend this year’s Hen Harrier Day (on the ‘Glorious’ 12th of August that marks the start of the shooting season) to show support for the cause, but it is never to late to spread the message! Use social media to help spread the word. 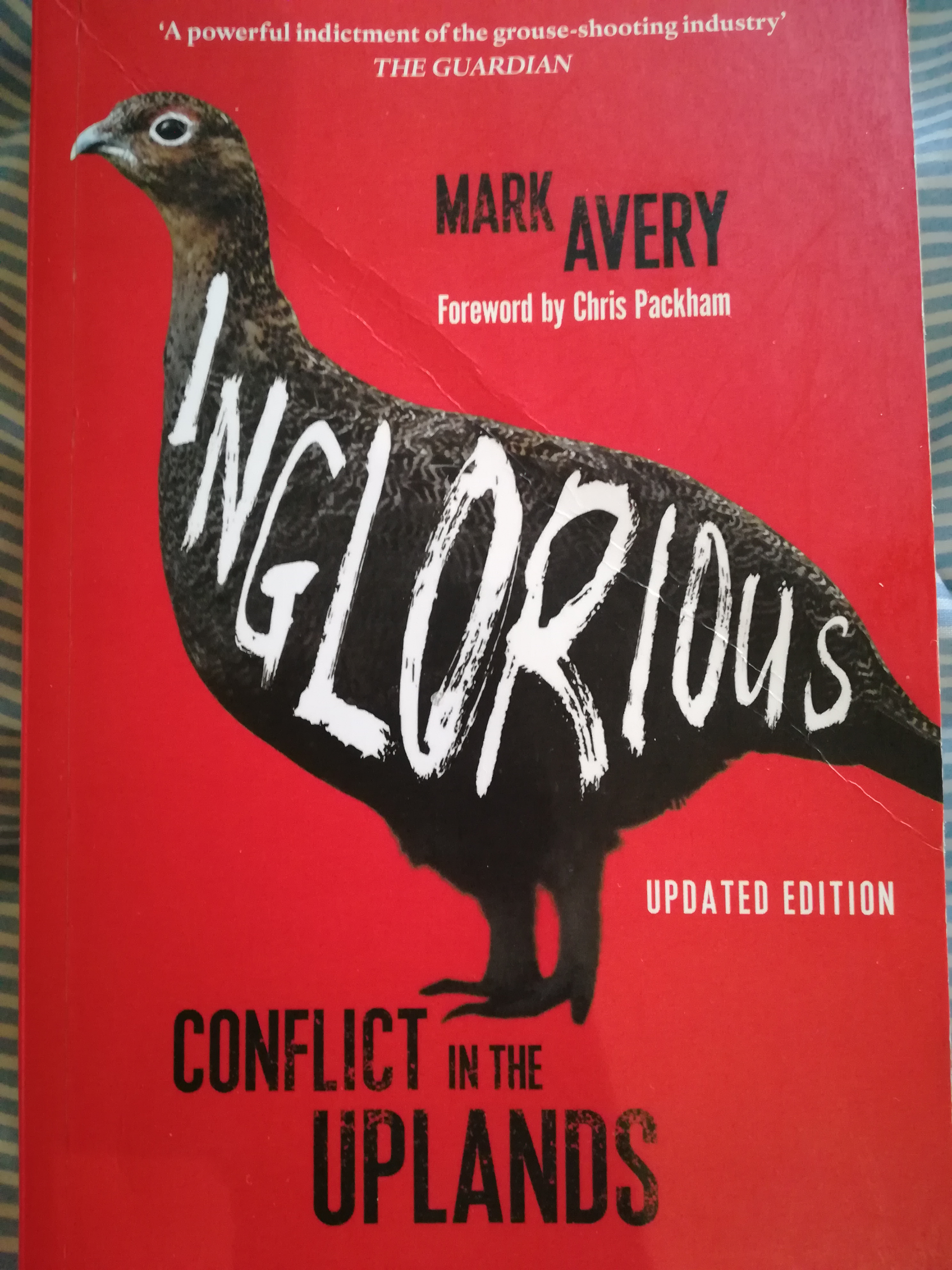 A fantastic book that explains the issue in detail and the progress that has been made in combating the practice.

https://markavery.info/blog/
A very active blog by the author of the above book delving into the issue in detail and keeping up to date with all news.

https://raptorpersecutionscotland.wordpress.com/
What it says on the tin – a blog about raptor persecution!

Apologies if I’ve missed anyone out. Do let me know